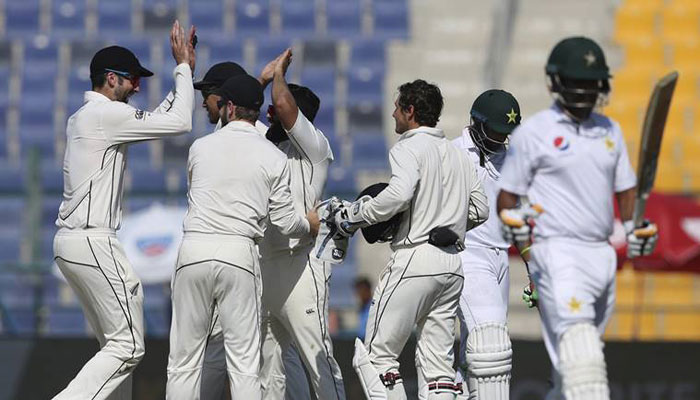 ABU DHABI (92 News) – New Zealand won the Test series against Pakistan 2-1 after defeating third match at the Sheikh Zayed stadium on Friday. Pakistan have been defeated by New Zealand on the fifth and last day of the third and final Test here. Pakistan were unable to chase 280, losing the third Test against New Zealand by 123 runs. Chasing a 280 at a difficult pitch, Pakistan batting line failed as the whole team was all out for 156. Pakistani batsmen were unable to overcome the Kiwis bowling attack with Southee, Patel and Somerville picking up three wickets each. Apart from Babar Azam who scored 51, no other Pakistani batsman was able to play solid innings with five failing to reach double digits. This is for the second time that New Zealand won a Test series against Pakistan in the opponents’ “home series”. Earlier, they had won the series 1-0 in 1969-70 in Pakistan. Earlier, New Zealand declared their second innings on 353-7 after some 45 minutes of batting with Henry Nicholls remaining unbeaten on 126 and Kane Williamson dismissed at his overnight score of 139. New Zealand won the opening test in Abu Dhabi by four runs before Pakistan squared the three-match series with victory in the second test in Dubai by an innings and 16 runs.