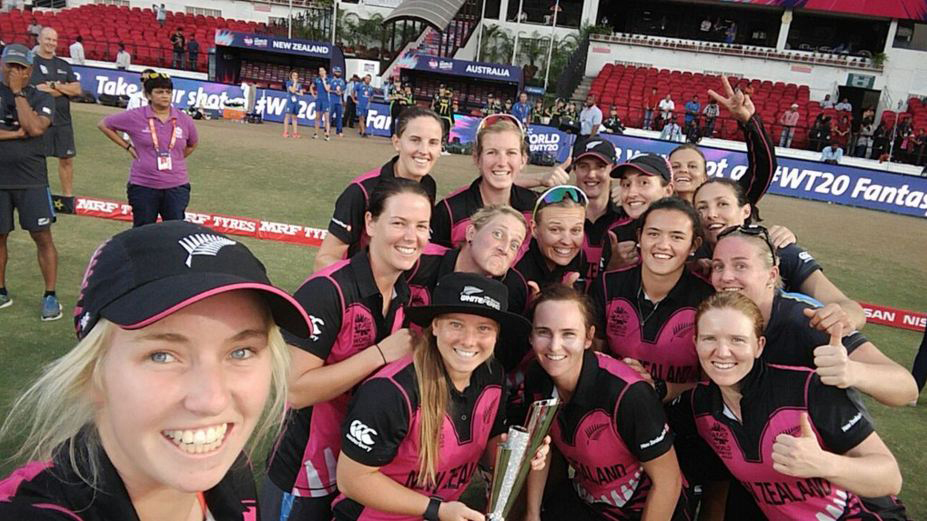 NAGPUR – New Zealand set itself up for a place in the semi-final of the ICC Women’s World Twenty20 2016 with a six-wicket win over three-time defending champion Australia in Nagpur on Monday, reported ICC. Having restricted the Southern Stars for 103 for eight, the White Ferns batted freely to surpass the target with 22 deliveries to spare in a Group A match. New Zealand’s third win in a row has almost certainly assured Suzie Bates’ team a place in the semi-finals even before its last league match against South Africa in Bangalore on 26 March. Australia, hoping to win a fourth successive title, has been left with just one win in two outings and matches in hand against Sri Lanka and Ireland. Australia made a disastrous start after electing to bat, losing the first four wickets for as many runs by the fourth over. Off-spinner Leigh Kasperek removed openers Elyse Villani and Alyssa Healy off successive balls in the second over, both to catches at mid-on. Skipper and star player Meg Lanning prevented a hat-trick but was run-out off the first ball she faced, before Kasperek had Erin Osbore caught behind in the fourth over. Ellyse Perry rescued the Southern Stars with a defiant 42 off 48 balls which included a six off Bates and three boundaries. Perry, who walked in at number-five with just two runs on the board, batted till the 17th over to take the total to 79 for six before she was given out leg-before off Sophie Devine. Kasperek finished with three for 13 and left-arm spinner Morna Nielsen, who opened the bowling, conceded just four runs from her four overs. Bates and her opening partner Rachel Priest gave New Zealand a rollicking start, putting on 58 for the first wicket by the eighth over. Priest hit 34 off 27 balls and Bates was run-out for 23, but Devine's run-a-ball 17 ensured New Zealand built on a 2-1 series win over Australia at home before the tournament. Bates refused to make her team the favourite to win a maiden ICC Women’s World Twenty20 title after beating the reigning champion. “I am really proud of the way we played today but we are under no illusion that we will win the title,” the New Zealand captain said. “We are treating every game as a knock-out game. “I am sure if we play the way we are, we can win it. If things go our way, we can win it. But we are not looking too far ahead." New Zealand was runners-up in the first two editions, losing to England in 2009 and to Australia in 2010. Lanning admitted the Southern Stars were outplayed by New Zealand. “It is obviously disappointing, but we never quite got into the game,” the Australia captain said. “Once you get on the back foot, it is very difficult to recover. “New Zealand outplayed us in this game. We just did not play well enough and New Zealand did.” Summarized scores: Australia 103-8, 20 overs (Ellyse Perry 42; Leigh Kasperek 3-13, Morna Neilsen 0-4, Erin Bermingham 2-23) New Zealand 104-4, 16.2 overs (Rachel Priest 34, Suzie Bates 23, Sophie Devine 17; Kristen Beams 1-25).