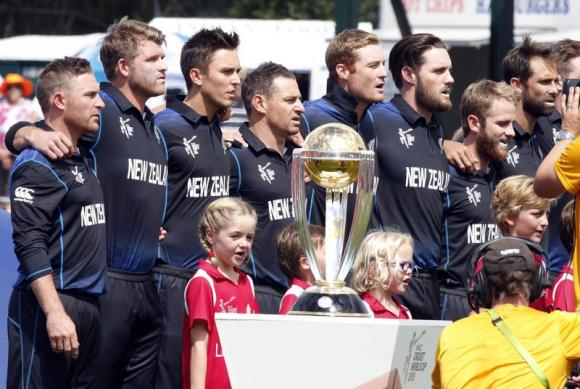 WELLINGTON - West Indies cricketers have typically exuded a lackadaisical 'it's cool man' attitude to their game, yet it is New Zealand who are taking the casual approach to their World Cup quarter-final, according to Daniel Vettori.

New Zealand have timed their run to perfection to peak for the World Cup since coach Mike Hesson took over in 2012, notching up test and one-day series victories as they genuinely improved and going through the pool phase unbeaten.

Expectations in the rugby-mad country have risen with the atmosphere at their pool matches against England and Australia not seen at a cricket match in New Zealand since the 1992 World Cup.

The 36-year-old Vettori, however, said the team had been trying to cocoon themselves from expectations in an effort to keep any pre-match nerves to a minimum.

"There is a real excitement around New Zealand and that is something I haven't seen," Vettori told reporters. "I think that having a World Cup at home and the fact we're playing well, people are supporting us.

"Just being at home makes it so much different.

"It is about trying to keep as consistent as possible and we've had a really casual-professional approach to the home summer and I think it's really key that we keep it going that way."

Expectations for the quarter-final had been ramped up with the respective side's path to the knockout phase.

Brendon McCullum's side qualified with two games to spare, while West Indies had lurched into the last eight after they beat United Arab Emirates by six wickets in a must-win final match.

Vettori, however, said the knockout portion of the tournament did teams no favours and they had to treat West Indies with respect.

"They're a pretty dangerous side all the way through," he added. "They are a very good team and have lots of players who can be destructive.

"That's what teams are looking to avoid, having that bad day and making sure it doesn't happen." – Reuters