ISLAMABAD (92 News) – Newly elected members of the National Assembly (MNAs) took the oath in the inaugural session of the 15th National Assembly on Monday (today). The national anthem was played at the opening of the session, which was followed by recitation of Holy Quran. Outgoing Speaker Sardar Ayaz Sadiq is presided the inaugural session of the NA and he administered the oath to the newly elected members of the parliament. This was followed by signing of the ‘Roll of Members’. 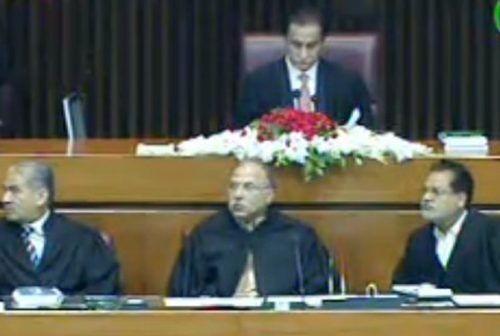 In the beginning of session, Ayaz Sadiq welcomed the newly-elected members and informed the procedure for taking oath. The outgoing speaker announced the date August 15 for the election of speaker and deputy speaker and also told the method of election. After that, Ayaz administered the oath of newly-elected members of NA. The MNAs signed according to the English alphabets. The swearing-in marked the third consecutive democratic transfer of power in the country. PTI chairman and likely to be prime minister Imran Khan, PPP co-chairman Asif Ali Zardari, chairman Bilawal Bhutto Zardari, former prime minister Yousaf Raza Gillani and PML-N president Shehbaz Sharif were among those who took the oath. 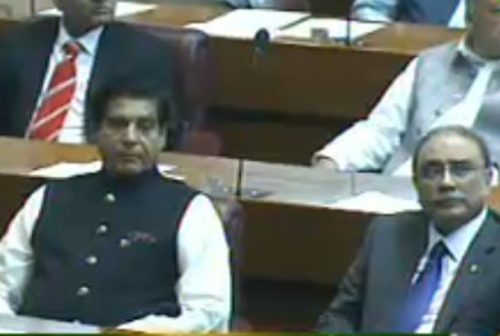 Other leaders of prominent political parties including AML Sheikh Rasheed, PTI leader Shah Mehmood Qureshi, Fawad Ch, Shafqat mehmood, PML-N leader Rana Sanaullah, Naveed Qamar and others were also in attendance. Bilawal, who has been elected to the National Assembly for the first time, shook hands with Imran Khan as the MNA-elects took their seats. 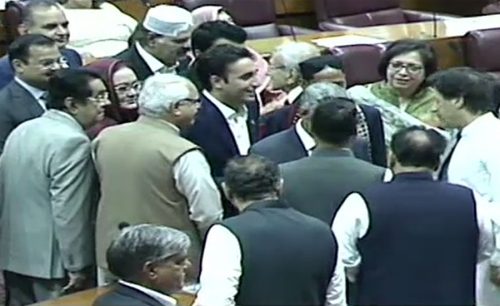 Bilawal took the oath as member of parliament for the first time, whereas his father returned to the house after more than two decades. 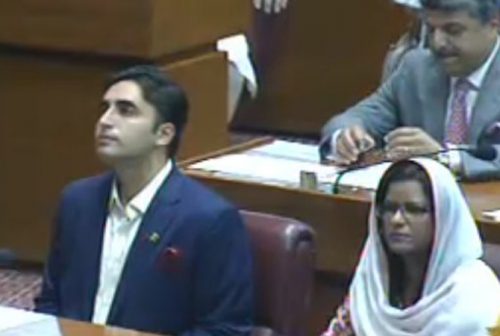 Imran Khan sat on the seat next to special seat of NA while Shehbaz Sharif sat with the Rana Tanveer and Ahsan Iqbal. 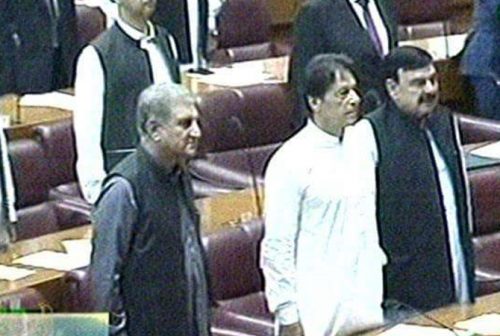 According to proposed schedule, the leader of the lower house of parliament, who automatically becomes prime minister of the country, will be elected on August 17. After the oath of MNAs, the elections of the speaker and deputy speaker of the National Assembly will be held on August 15. Candidates up for the coveted posts will file their nomination papers to the Speaker’s office on August 14. The NA speaker will be elected first after which he will conduct the election of the deputy speaker. The deadline for the submission of the nomination papers for prime minister office is 2:00 pm on August 16 as the election of the PM will be held the next day (August 17). President Mamnoon Hussain will administer the oath to the prime minister after his election.

He who committed theft must be held accountable: PM Imran Khan