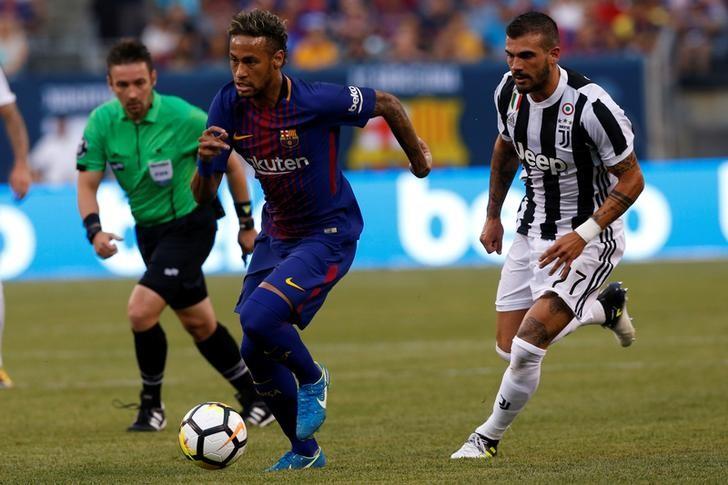 EAST RUTHERFORD - Two sublime goals from Neymar gave Barcelona a 2-1 win over Juventus in front of an 82,000 crowd at MetLife Stadium in the International Champions Cup.

Neymar, who is rumoured to be a transfer target of Paris Saint-Germain, put on a master class alongside Lionel Messi as Barcelona turned the tables on the Italian side who knocked them out of last season's Champions League quarter-finals.

Neymar opened the scoring in the 15th minute, the Brazilian playing a smart one-two with Paco Alcacer before curling high past goalkeeper Gianluigi Buffon into the top right corner.

The Brazilian then doubled Barca's lead 11 minutes later with a world-class goal. Taking a pass from Messi on the left, Neymar slithered past three lunging Juventus defenders as he weaved his way across the box before wrong-footing Buffon and slamming a right-footed shot into the net.

Neymar and Messi gave way at half-time, while Juventus also made several changes in the second half.

The Serie A champions posed more of an attacking threat after the break and pulled a goal back in the 61st minute when Paulo Dybala's corner was headed home by Giorgio Chiellini.

Juventus manager Massimiliano Allegri was impressed by Neymar. "He played a fabulous game," Allegri told reporters. "Along with Messi, they are tremendous talents and you could see that on the pitch."

As well as reiterating his desire to see Neymar remain at Barca, Ernesto Valverde said the match was a good indicator of his side's pre-season progress. "There were a lot of good things in this game. Intention to dominate through the whole match, even though we had a tough opponent in front of us," he added. "These type of things are really useful to us."

Barcelona next play Manchester United on Wednesday in Landover, Maryland, the same day Juventus takes on PSG in Miami. -Reuters