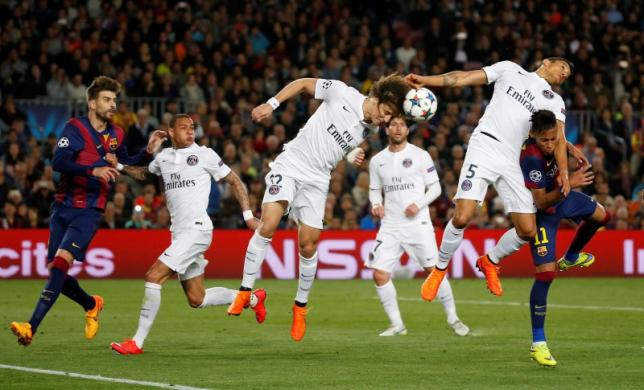 BARCELONA - Neymar scored twice as Barcelona reached the Champions League semi-finals for the seventh time in the last eight seasons by comfortably beating Paris St Germain 2-0 on Tuesday to complete an emphatic 5-1 aggregate victory. The Nou Camp crowd were brought to their feet for Neymar's first goal as midfielder Andres Iniesta ran from his own half, skipping past three challenges, before delivering a perfect pass for the Brazilian, who rounded keeper Salvatore Sirigu and slid the ball home after 14 minutes. PSG offered little resistance as Barca swept the ball around midfield and the Catalan side went further in front when Neymar headed home a curling cross from fullback Dani Alves after 34 minutes. Barca eased off in the second half and were happy to hold on for a victory that keeps them on course to repeat their treble success of 2009. "We did the same that we did in Paris, we came out and played our game and scored the goals we needed," Neymar said in an interview with Spanish television broadcaster TVE. "I think we are on good form, in the Champions League, in La Liga, everything and hopefully we can continue the same way." PSG were without injured duo Thiago Motta and Thiago Silva but they did have former Barca striker Zlatan Ibrahimovic and Marco Verratti back from suspension. Their Brazilian defender David Luiz, who had a torrid time against Luis Suarez in the first leg, was booked after just three minutes for a reckless challenge on Ivan Rakitic. Barca had no intention of sitting on their 3-1 advantage from the first leg and conjured up a magical first goal with Iniesta the architect and Neymar the executioner. Iniesta, who was only given the all-clear from a pelvis injury on Monday, dictated play in midfield and with the quality of Barca’s forward line, the Catalans were able to take full advantage. Ibrahimovic correctly had a goal ruled out for offside in a rare attack from the French side before Barca doubled their lead when Alves swung in a left-footed cross and an unmarked Neymar headed home. Barca lost some of their dominance when Iniesta was replaced by veteran Xavi at halftime. Yet apart from a strike from Verratti that went wide and a powerful effort from Ibrahimovic that was saved by keeper Marc-Andre ter Stegen, PSG caused few problems for the Barca defence.