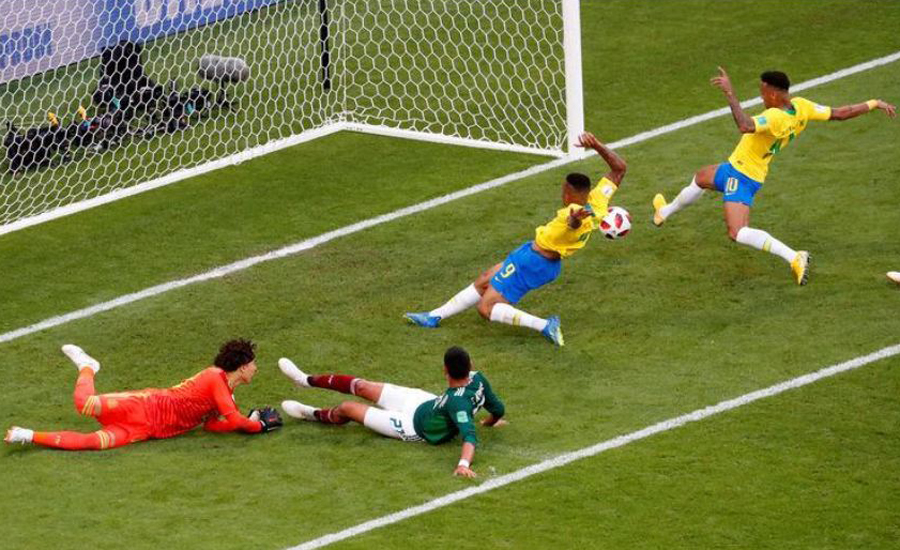 SAMARA, Russia (Reuters) - Neymar barged his way into the World Cup limelight with a goal, an assist and another helping of histrionics as Brazil roared into the quarter-finals with a 2-0 victory over Mexico on Monday that inflicted a seventh straight last-16 exit on the central Americans. The PSG forward was both architect and executioner for Brazil, sliding home in the second half and then teeing up Roberto Firmino late on, but he also writhed on the floor, seemingly in agony, after Mexico’s Miguel Layun had made slight contact with his ankle. That should not overshadow his generally positive display, however, as the five-times champions beat an otherwise stubborn Mexico, whose World Cup began with such promise with a victory over champions Germany, but ended in familiar fashion in the first knockout round. It was the seventh World Cup running that Brazil have reached the last eight, where they will now face Belgium or Japan, while Mexico have not made it to that stage since they hosted the tournament in 1986. Mexico, who enjoyed an enviable recent record against Brazil having won seven of their previous 15 matches against them, were a threat on the counter in the first half but then faded without ever really being put to the sword. For all their quasi-mythological attacking traditions, this Brazil side have a pragmatism that keeps them in check in such a way that you cannot see them ever truly cutting loose at this tournament. Having kept clean sheets in seven of their previous eight games, they were never going to commit men forward and allow Mexico to pick them off on the counter in the same way that Germany did in the group stage. That is not to say that they were not under the cosh in the early stages as Mexico sought to isolate the Brazilian fullbacks Fagner and Filipe Luis, who both looked vulnerable as Carlos Vela and Hirving Lozano bore down on them. Lozano had an effort blocked after two minutes as did Hector Herrera, but as the first half wore on Brazil got on top in the stifling Samara heat. A glaring spotlight had been on Neymar after his opening three performances saw him miss a litany of chances, frequently squander possession and spend far too long on the turf. Yet he answered a number of questions with his performance and a decisive finish early in the second half from a move that he had started himself. Minutes after the restart, Brazil took the lead in exquisite fashion from Neymar. The move began when he darted across the edge of the area before a perfect backheel released Willian, whose low cross fizzed into the danger area where Neymar slid in to turn the ball home. It was a choking blow for Mexico, who had been the better side for the opening half an hour, pegging Brazil back and creating several half-chances, but it was Neymar’s habit of constantly hitting the deck that most irked the Mexico coach. “Unfortunately, and it is a shame for football, we wasted a lot of time because of one player,” Juan Carlos Osorio said. “It is a shame for all the people watching, all the children watching... There shouldn’t be acting. I think this had an impact on our pace and style.” Brazil had to wait until the 88th minute to put the match to bed when Neymar was the architect, crossing for Firmino to tap the ball home. They will have to do without defensive midfielder Casemiro in the quarters, however, after he picked up his second booking.