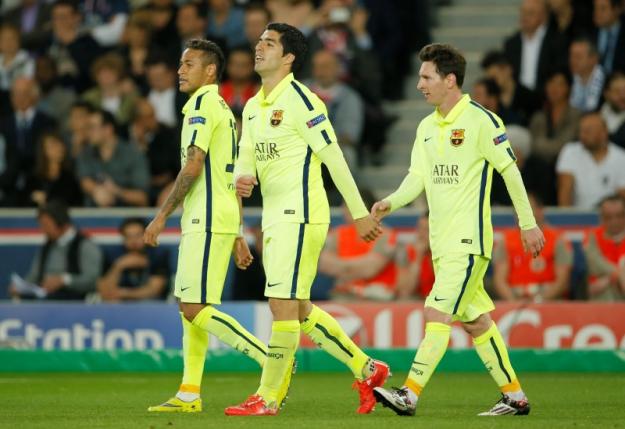 PARIS - Barcelona took a big step towards the Champions League semi-finals on Wednesday as a goal from Neymar and a Luis Suarez double ended Paris St Germain's 33-game unbeaten home run in Europe with a 3-1 win at the Parc des Princes. PSG, who were without Zlatan Ibrahimovic, suspended for one game after picking up a red card in the last-16 second leg at Chelsea, fell behind when Neymar netted from close range at the end of a quick counter attack in the 18th minute. Suarez doubled the tally in the 67th after slaloming through the PSG defence, who lost captain Thiago Silva to a possible hamstring injury after 21 minutes, and wrapped it up 11 minutes from time with a curling shot into the top corner. The hosts reduced the deficit in the 82nd minute when Jeremy Mathieu deflected Gregory van der Wiel's shot into his own goal as PSG suffered their first loss at home in Europe since 2006 ahead of the return leg at the Nou Camp next Tuesday. In the absence of the injured Thiago Motta and the suspended Marco Verratti, Yohan Cabaye and Adrien Rabiot were fielded alongside Blaise Matuidi in the PSG midfield and the trio's collective lack of Champions League experience showed. PSG started confidently with the classy Javier Pastore delighting the crowd with delicate twists and turns, but after 18 minutes, the home side were 1-0 down and they had lost centre back Silva. Lionel Messi almost opened the scoring in the 13th minute when his beautifully curled shot from just outside the area smashed Salvatore Sirigu's right post, but he was more accurate seven minutes later when he set up Neymar for the opener. Rabiot lost the ball near the touchline to Sergio Busquets, who found Messi in midfield. The Argentine played Neymar through and the Brazil striker coolly finished from close range. Four minutes into the second half, Pastore combined with Matuidi before Barcelona keeper Marc-Andre ter Stegen parried away his fierce shot from 18 metres. Suarez then danced past substitute David Luiz and Marquinhos before poking the ball past Sirigu to make it 2-0 to Barca, who had lost 3-2 in Paris in the group stage earlier in the season. In the 79th minute, Suarez ran unchallenged through the middle and curled a shot into the top corner, only for Van der Wiel to reduce the arrears three minutes later when his low shot was deflected into the net by Mathieu. - Reuters