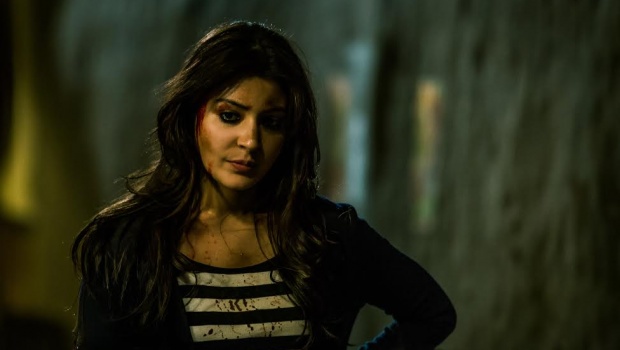 MUMBAI - Navdeep Singh’s “NH10” is a brutal, often uncomfortable film that makes no attempt to sugarcoat its reality, or to ease its audience into the narrative. As in his earlier film, “Manorama Six Feet Under”, Singh examines the realities of living in an India that is far away from the lives that wealthy, urban Indians lead. Between the city and anarchy lies little more than a tollbooth.

Singh’s film, modeled on the 2008 film “Eden Lake” with Michael Fassbender, seems made for these urban audiences, who could be forgiven for rethinking their plans to drive down scenic country highways to exotic holiday destinations. The film devotes its nearly two-hour running time to making sure that they do.

Anushka Sharma plays Meera, a cocky executive who scoffs at misogynistic office brutes, but is helpless when faced with goons who try to block her car one night. Her husband, Arjun (Neil Bhoopalam), is convinced that buying a gun is the solution to this.

But a few days later, on a highway outside Delhi in Haryana, Arjun discovers that a gun means nothing when faced with a group of angry young men on their way to kill their sister and husband because she married a man that she loves and whom they do not. When Arjun intervenes, Satbir (Darshan Kumar) slaps him. Enraged, Arjun chases them, and tells Meera he’s “going to teach those villagers some manners.”

Bravado proves to be a huge mistake. Arjun and Meera find themselves in the middle of a land where all their ideas of safety, the rule of law and of what is right mean nothing. “NH10,” (the NH, for non-Indian readers, stands for “National Highway”), shows the sharp divide between two Indias – a town-and-country chasm that seems light-years wide, particularly for urbanites who ignore the heartland or express little more than contempt for its people.

Singh creates a sense of foreboding from the beginning. Even when the couple is ensconced in their apartment, you just know they’re in for something bad. Arvind Kannabiran’s cinematography, which chronicles Gurgaon as an urban wasteland, then segues to the arid expanses of Haryana, adds to this bleak tone. Singh makes subtle points about the one sad bridge across the city-country gulf: the misogyny that women face in office towers and in the midst of their villages.

Sharma, who co-produced the film, portrays Meera’s transformation from confident to terrified to vengeful with panache. Compared to Bhoopalam, who seems to be out of place and awkward in his scenes, Sharma is a natural, and carries the film on her shoulders. Singh’s control over his craft is apparent from the first frame; if only he had resisted the urge to play two songs in the background during the final minutes of the film.

But these are minor complaints. “NH10” scares, thrills and entertains throughout its 115 minutes. It also suggests that Bollywood finally might have turned a corner this year, and is ready to churn out films that more faithfully reflect the country we inhabit – the whole country. –Reuters