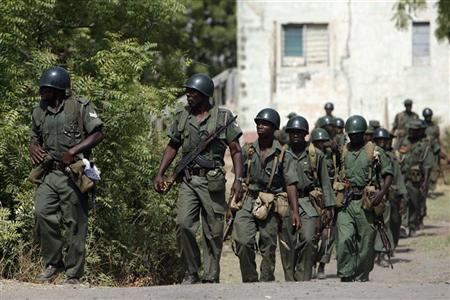 LAGOS/ABUJA - The Nigerian federal high court in Lagos has barred the military from deploying around polling stations during March 28 national elections, the lawyer for the parliamentarian who brought the case said on Tuesday. Opposition leader Femi Gbajabiamila had argued that any such deployment would violate the constitution, lawyer Ijeoma Njemanze said, amid opposition fears that soldiers could be used to intimidate voters. The ruling, made on Monday by Justice Ibrahim Buba, does not affect troops already dispatched to northeast Nigeria, where they are needed to battle an Islamist insurgency, she added. The tight election pits President Goodluck Jonathan against former military ruler Muhammadu Buhari. It was meant to take place on Feb. 14, but was delayed by six weeks because the military said it could not guarantee security, especially in the northeast, where Islamists have waged a six-year insurgency. Jonathan is seeking a second elected term, in the closest-fought election since the end of military rule in 1999. If the military deploys despite the court order, the opposition is likely to use that fact to dispute the result should it lose the parliamentary and presidential ballot. The military's role in the electoral process, including pressing for the vote to be delayed, has alarmed some Nigerians, reminding them of the bad old days of dictatorship, which included the annulment of a 1993 vote by a military government. The case was brought after an outcry over the heavy deployment of troops in southwestern Ekiti and Osun states last year. Reports in the press alleged that soldiers had conspired to intimidate voters and rig a by-election in Ekiti -- a charge the military and ruling party declined to deny or confirm. Electoral officials said on Tuesday about 82 percent of Nigerian voters had collected the cards they need to present at polling stations to take part in Saturday's election, leaving 18 percent of registered voters disenfranchised. After the decision to postpone the vote from February, there has been a concerted push against Boko Haram militants, especially by neighbors Chad and Niger, chasing them out of much of the territory they had previously controlled. There had been fears that millions of Nigerians in areas affected by the insurgency, including a million internal refugees, would be unable to vote. "Wherever it is safe and people have resumed normal life, we will conduct elections," election commission head Attahiru Jega said. "We've also got arrangements to conduct elections for internally displaced persons. We have designated centers ... where IDPs will be able to vote." The commission said about 56.7 million voter cards had been collected by Nigerians. Jega said distribution had now ceased, apart from a handful of cards that had just been produced and would be handed out in the next few days. - Reuters