Nigerians vote in first genuine contest since end of dictatorship 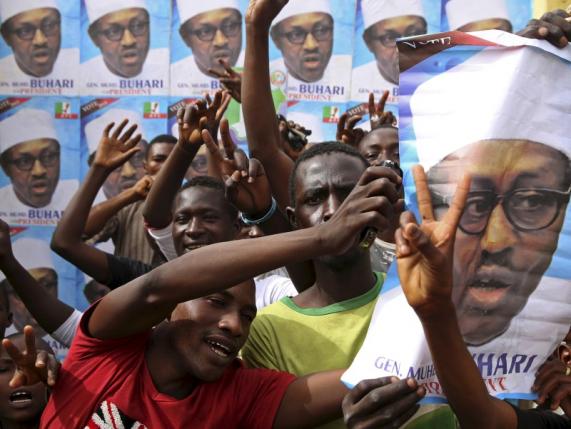 Nigerians vote in first genuine contest since end of dictatorship

ABUJA - Nigerians vote on Saturday in what looks set to be the first genuine electoral contest since the end of military rule in 1999, one in which an opposition aspirant has a fighting chance of unseating the incumbent President Goodluck Jonathan. Jonathan, seeking a second elected term, faces former military ruler and main opposition candidate Muhammadu Buhari in a tense race with an electorate divided along ethnic, regional and in some cases sectarian lines. The vote is also seen as a referendum on the former zoology professor's record, the most blazing issues being rampant corruption and insecurity. Twelve other minor candidates are also running. Polls open across 119,973 polling stations at 8 a.m. (0700 GMT) for accreditation, then actual voting starts at 1.30 p.m. and continues until the last person has voted. That could drag well into the next day -- 56.7 million voters are eligible. A fair, credible and peaceful poll would be a new chapter in the often troubled history of Africa's most populous nation, biggest economy and top oil producer, a past blighted by graft, secessionist movements, military coups and in the last six years an Islamist Boko Haram insurgency that has killed thousands. The poisonous rhetoric emanating from both sides' campaigns, and some scuffles and shootings ahead of the poll, have raised fears its knife-edge closeness could be a catalyst for violence. When Buhari, a northern Muslim, lost to Jonathan, a southern Christian and son of a canoe carver in the oil producing Niger Delta, in 2011, it triggered rioting in the mostly Muslim north that killed 800 people and rendered 65,000 homeless. Fearing a contested poll could spill even more blood this time, world powers, including US President Barack Obama, British Prime Minister David Cameron and the European Union are pressuring both sides to chill the tempers of their supporters. "DEVILISH MOVES" In a Friday televised address Jonathan also warned that "those who may harbor any intentions of ... unleashing violence during the elections ... should think again." It did little to reassure many Nigerians, who on Friday were queuing up en masse to withdraw cash, buy dwindling fuel supplies and stock up on provisions at frantic supermarkets. "I filled my tank just in case I need to flee ... But I hope I don't have to do that," said James Ike, a banker in Kaduna, the city worst affected by violence last time around. In a climate of mutual suspicion, Buhari's All Progressives Congress warned against "devilish moves by those ... bent on rigging the elections and plunging the nation into crisis." Buhari's top selling point is a belief that he didn't steal during his 1983-85 presidency. Jonathan's administration has been beset by multibillion dollar oil corruption scandals. Buhari's reputation as an army strongman plays well with voters critical of the government's failure to protect civilians from Boko Haram, highlighted when they kidnapped over 200 school girls in April last year. The sect has been routed in the past six weeks, though it isn't clear if that will help Jonathan win. He points to reforms such as cleaning up farm fertilizer subsidies and privatizing the rotten state power provider. But as always in this nation of 170 million people, ethnic and regional sentiments remain paramount. Buhari is hugely popular in the north, Jonathan, in the south and east. That could leave the mostly ethnic Yoruba but religiously mixed southwest, centered around the commercial capital Lagos, the kingmakers. They voted for Jonathan last time but since then Yoruba elites have rallied decisively around Buhari. - Reuters