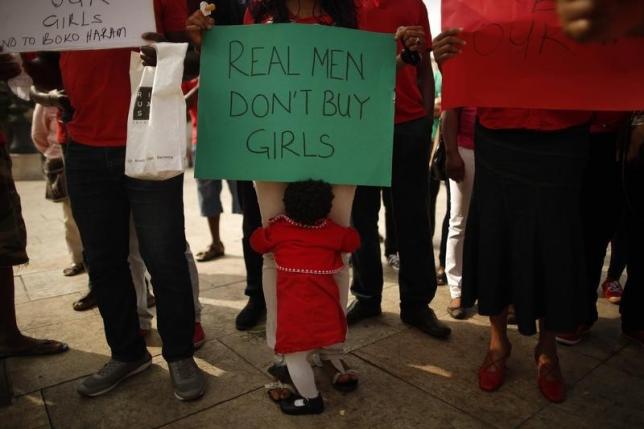 DAKAR/LONDON - Boko Haram Islamic militants have kidnapped at least 2,000 girls and women since the start of last year, turning them into cooks, sex slaves and fighters, and sometimes killing those who refused to comply, Amnesty International said on Tuesday. The human rights group's 90-page report based on dozens of interviews with witnesses and escaped abductees comes a year after the group seized more than 200 schoolgirls from Chibok, a community deep inside an area of northeastern Nigeria the fighters claimed as their caliphate. The kidnapping, and a video showing the captured girls dressed in dark hijabs soon afterwards, provoked international outrage. But the majority are still missing despite Western pledges to help track them down and a Chadian attempt to broker their release. Boko Haram's leader, Abubakar Shekau, claims the girls had been "married off" to his fighters. Amnesty's report said that Boko Haram, meaning Western education is sinful in Hausa, routinely rounded up women and girls after taking control of a town and held them in houses or prisons. A 19-year-old woman told Amnesty how she had been abducted at a wedding in September 2014 alongside the bride and the bride's sister and then held at a training camp in Madagali alongside hundreds of female fighters. "I was among the girls trained to shoot. I was also trained how to use bombs and how to attack a village," said the woman, who was gang-raped several times by the guerillas and wished to remain anonymous. She told Amnesty some of those who refused to covert to Islam or to fight were dumped in a mass grave. Many men who refuse to join Boko Haram's ranks have also been killed. Two young men told researchers that at least 100 were executed in one day in December when the armed group took over Madagali. They survived because the killers' knives had become too blunt to slit more throats. "These appalling executions, the sexual violence, the recruitment of child soldiers, these are war crimes and crimes against humanity and they need to be investigated (by the Nigerian authorities)," Daniel Eyre, author of the report, said in an interview. DRAGGED INTO THE FOREST Boko Haram is thought to have killed thousands of people in its six-year insurgency. But Nigerian troops alongside neighbouring armies from Chad, Cameroon and Niger have won back vast swathes of territory from them in recent weeks. Nigeria's President Elect Muhammadu Buhari, who beat Goodluck Jonathan in an election two weeks ago and has vowed to squash Boko Haram, said on Tuesday the girls' whereabouts was unknown but that he would try to locate them. "As much as I wish to I cannot promise that we can find them. But I say to every parent, family member and friend of the children that my government will do everything in its power to bring them home." UN Special Representative for West Africa Mohamed Ibn Chambas said that some abducted girls may have been taken by fighters into the Sambisa Forest, a vast former colonial game reserve where some of the group are thought to be regrouping. "The speculation is that they are in the Sambisa Forest being used as human shields," he told Reuters at the weekend. A woman interviewed by Amnesty in its report said that she had been held alongside several of the Chibok schoolgirls in nearby Gwoza, a town recaptured by the Nigerian army last month. Separately, residents of the town of Damasak freed by Niger and Chad troops in March said that more than 400 women and children had been kidnapped by Boko Haram. A regional diplomat said that Chadian troops had recently found a grave thought to contain Boko Haram "soldier wives" killed by fleeing militants who feared they would reveal their identity. About 800,000 children have been forced to flee fighting, according to the United Nations children's fund. - Reuters