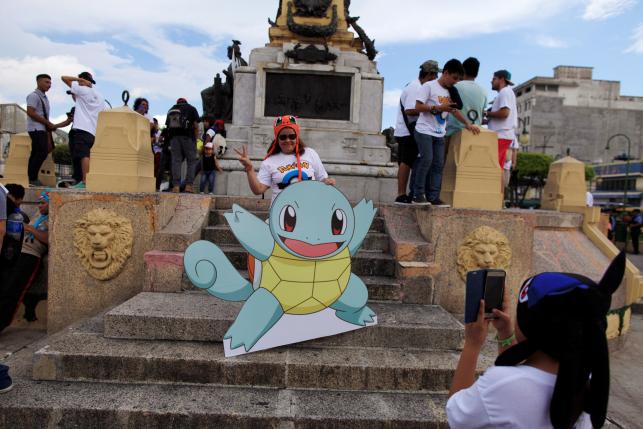 TOKYO – Shares in Nintendo Co tumbled as much as 18 percent on Monday after the company said Pokemon GO would have a limited impact on its earnings - their biggest setback so far after a huge run-up on the smash-hit game. The Kyoto-based gaming company, which is due to report first-quarter results this week, surprised markets with a statement on Friday that income garnered through its 32 percent stake in affiliate Pokemon Company, which owns the licensing rights, would be limited and that it did not plan to revise its earnings outlook for now. Recording its biggest decline since October 1990, the stock ended down 17.7 percent, or by 5,000 yen - the daily limit allowed. But some market players said Nintendo was being disingenuous, adding that there were few expectations of upward revisions to its profit targets so early after the game's launch and that it was clear the game would be key to earnings. "The market has overreacted to the Nintendo statement," said David Gibson, a senior analyst at Macquarie Securities Group, noting the game in Japan had broken records with 10 million downloads in one day. "I believe that Pokemon GO will be material in the company's earnings given the current trends for the game." Pokemon GO's success has triggered massive buying in Nintendo shares and even with Monday's decline, the shares are still up some 60 percent compared with levels prior to the game's July 6 launch in the United States, Australia and New Zealand, adding nearly $12 billion in market value. Yasuo Sakuma, portfolio manager at Bayview Asset Management, said he still saw the company's shares as cheap given the potential for Nintendo to reap rewards from other strong character franchises as it forays deeper into mobile gaming. "Nintendo is well-placed to boost its earnings with its other characters, such as Super Mario and Zelda and their potential is unknown," he said. Pokemon GO is Nintendo's first venture into mobile gaming as the company had until recently been keen to protect its console business from cannibalization. In addition to its stake in Pokemon Company, Nintendo has an undisclosed holding in Niantic Inc - the game's developer, which was spun off from Google. It is also expected to benefit from sales of Pokemon GO Plus - an accessory that alerts players to nearby Pokemon so that they don't have to always be looking at their smartphones. Nintendo said, however, that sales of the device have already been factored into its earnings outlook. Nintendo, which reports earnings on Wednesday, has forecast a 37 percent rise in operating profit to 45 billion yen ($425 million) in the year to March. While it is expected to see upside from Pokemon GO it will also have to contend with a strong yen which eats into the value of earnings garnered abroad. Seven analysts' estimates that have been revised since the game's launch range from 36 billion yen to 60 billion yen.  –Reuters