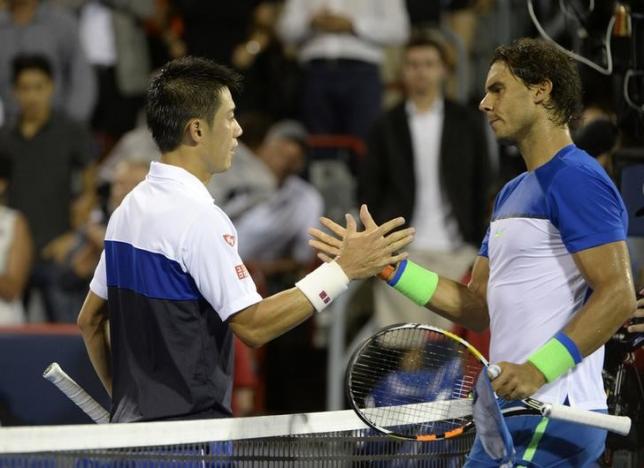 MONTREAL - Kei Nishikori swept aside Rafa Nadal in the quarter-finals of the Rogers Cup in Montreal with a swift 6-2 6-4 victory, while world number one Novak Djokovic saved two match points before beating Latvian Ernests Gulbis. Japan's Nishikori, seeded fourth, took just 82 minutes to beat the Spaniard, a 14-times grand slam champion and a winner three times at the Rogers Cup. “I was close in Madrid, but today I was dominating everything,” said Nishikori after getting his first win over Nadal in eight attempts. “I definitely needed to change some of my tactics when playing against Rafa. I had to play 100 percent to beat him.” Nishikori will next meet Andy Murray in the semi-finals after the Briton defeated defending champ Jo-Wilfried Tsonga of France 6-4 6-4. Nishikori won his third title of the season in Washington last week and is hitting his stride ahead of the U.S. Open. The 25-year-old reached the final at Flushing Meadows last year only to lose in straight sets to Marin Cilic. "(Nadal) wasn’t making many first serves tonight, so I knew I had to be more aggressive on the second serve,” Nishikori said. “Everything was working well, so I am very happy to win today.” Djokovic almost joined Nadal on the way out but rallied from a set down to beat Gulbis 5-7 7-6(7) 6-1, setting up a semi-final with Jeremy Chardy of France. The Serb, who is looking for a fourth Canadian crown, said he would have had no complaints had Gulbis beat him. “You have to give credit to (Gulbis) for playing an excellent match,” Djokovic said. “He was always making me play an extra shot, and putting a lot of pressure on my second serve. "I had a lot of chances and closed it out in the end, but he had a couple of match points and it would’ve been deserved if he had won this match tonight.” The win extended Djokovic’s Master Series streak to 29 victories. He has not lost since Roger Federer beat him in Shanghai last year. A victory in Montreal would be his record-tying fifth Masters Series title of the year, equalling his own mark in 2011 and Nadal's from 2013. Unseeded Chardy also clawed his way back from the brink, saving seven match points to beat American John Isner 6-7(9) 7-6(13) 7-6(4) and reach his first Masters Series semi-final. "It was a crazy match," Chardy said. "We both served really well and we both had our chances, so I am happy that I won it in the end. "On those match points, I was only thinking about where I wanted to hit my serve or how to play the point. Under pressure it's easy to get nervous and miss if you start thinking about the match point or the break point." -Reuters