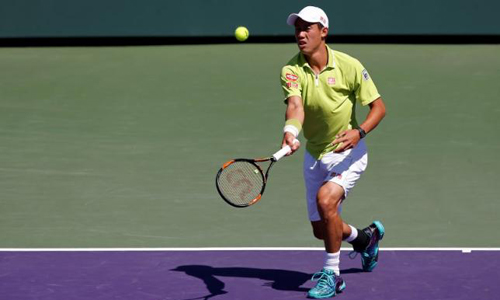 MIAMI - Japan's Kei Nishikori made a confident start to his Miami Open bid on Saturday, beating Russian Mikhail Youzhny 6-2, 6-1 in 69 minutes in their second round meeting. Nishikori, the fourth seed at Key Biscayne, won 70 percent of his service points and converted five of his 16 break point chances. "I felt really good on the court. Really confident. I was almost dictating the court against Misha, and serving well. Everything was good," Nishikori said. Jo-Wilfried Tsonga enjoyed victory in his first match back from injury with a 6-4 3-6 6-3 victory over American Tim Smyczek. The Frenchman had not played this year after picking up the injury in the Davis Cup final defeat to Switzerland in November. “I didn't expect to play my best tennis today, but I'm happy the way I managed my match,” said Tsonga. "I played pretty solid. I just had a little hole in the second set. But it's normal when I haven’t played in a couple of months now. I hope it's going to be better and better, but for the first match it was already something good for me." Sixth seed David Ferrer of Spain beat Argentina's Federico Delbonis 6-1 6-1. World number one Novak Djokovic was to open his campaign against Slovakia's Martin Klizan later on Saturday. - REUTERS