Nissan, ex-CEO Ghosn charged in US with hiding $140mn from investors 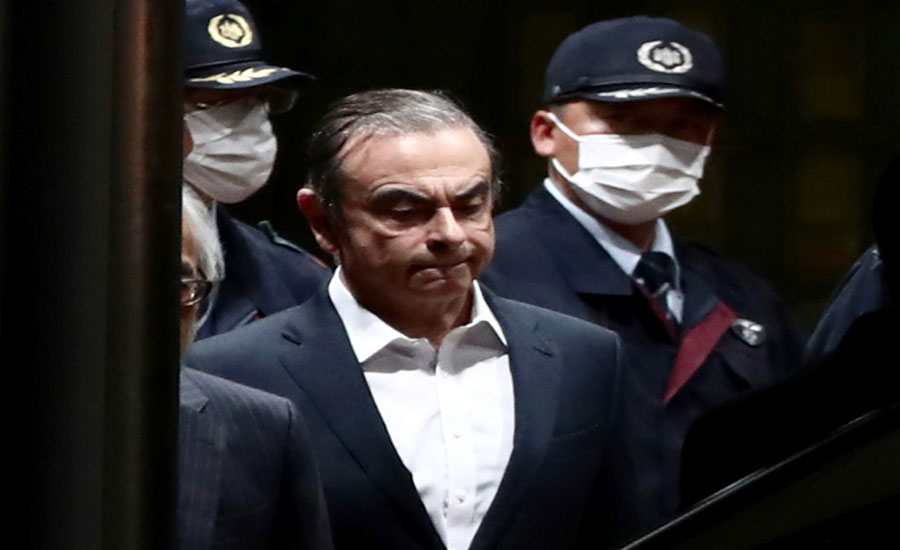 Nissan, ex-CEO Ghosn charged in US with hiding $140mn from investors

NEW YORK - US securities regulators on Monday charged Japanese automaker Nissan and its former CEO Carlos Ghosn with hiding more than $140 million in Ghosn's expected retirement income from investors. Ghosn will pay $1 million in fines to settle the matter and will be barred from serving as a corporate executive for 10 years, the Securities and Exchange Commission (SEC) said in a statement.
Nissan will pay a $15 million fine. The SEC also charged ex-board member Greg Kelly with aiding in the fraud. He agreed to a $100,000 fine and a five-year corporate officer ban. But Ghosn, his former right-hand man Kelly, and Nissan neither admitted nor denied the SEC's allegations. Attorneys for Ghosn welcomed the deal, saying it allowed him to focus on fighting similar allegations in Japan. The SEC said Ghosn, 65, working with Kelly and other subordinates, devised ways to disguise large amounts of Ghosn's compensation. The machinations allegedly stemmed from a shift in Japanese policy in 2009 that required disclosure of individual director compensation above 100 million yen, a little more than $1 million at the time. "Ghosn became concerned about criticism that might result in the Japanese and French media if his total compensation became publicly known," the SEC said. Ghosn directed subordinates to lobby the Japanese government to rescind the policy. When that failed, "Ghosn and Nissan subordinates took steps to conceal from public disclosure a substantial portion of Ghosn's compensation," the SEC order said. Ghosn and Kelly allegedly "fraudulently inflated" Ghosn's pension allowance by more than $50 million and created a "false disclosure" to disguise the increase, the SEC said in an order. Subordinates of Ghosn falsely told the company's chief financial officer that another big set of payments under a long-term incentive plan went to many Nissan employees and not primarily to Ghosn, the order said. Ghosn also instructed an employee to change the currency in which Ghosn's pension would be paid. Under a 2007 compensation agreement, Ghosn was to be paid in yen, but a 2011 clause allowed Ghosn to choose whether to be paid in yen or US dollars, resulting in an increase of about $22 million in retirement payments, the SEC said. "Investors are entitled to know how, and how much, a company compensates its top executives," said Stephanie Avakian, co-director of enforcement at the SEC. "Ghosn and Kelly went to great lengths to conceal this information from investors and the market." Ghosn's legal team underscored Monday that the settlement involved no legal finding against him.

"We are satisfied with the conclusion of this agreement in the United States," said a statement from his attorneys, noting no court had found that Ghosn committed "punishable acts."
"The settlement specifically allows Mr Ghosn to continue to fight the allegations against him in Japan, which Mr Ghosn intends to pursue vigorously," it said, expressing confidence he will eventually be acquitted. He is awaiting trial on charges of under-reporting millions of dollars in salary and of using company funds for personal expenses. News reports in Japan have said hearings will begin in April.
Following his arrest last November in Japan, Ghosn denied wrongdoing and accused Nissan executives of plotting against him, claiming they opposed his plans to further integrate the firm with France's Renault. Avakian also said Nissan had misrepresented Ghosn's pension allowance to investors, a move that "advanced Ghosn and Kelly's deceptions and misled investors, including US investors." The SEC order in the Nissan settlement also cited the car company's "significant cooperation" with US officials and corporate governance changes implemented in the wake of the scandal. These included having the board's compensation committee composed entirely of outside directors and making more of the company secretary's decisions subject to audit and internal controls. "Nissan is firmly committed to continuing to further cultivate robust corporate governance," the company said in a statement. The settlement came as the Wall Street Journal reported that Nissan's general counsel Ravinder Passi raised doubts on whether an internal probe at Nissan into Ghosn was tainted by conflicts of interests, clouding the carmaker's efforts to move beyond the scandal. It also comes two weeks after Hiroto Saikawa resigned as chief executive amid allegations that he himself padded his salary. SOURCE: AFP