No country can progress without accountability: PM 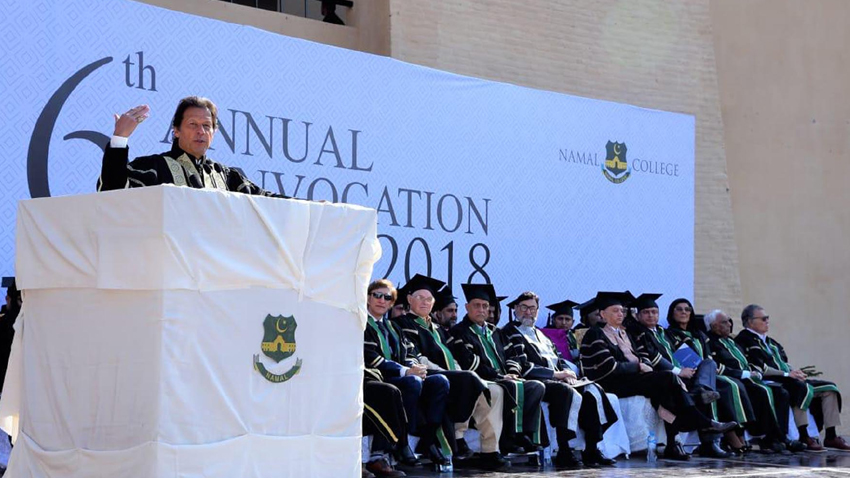 No country can progress without accountability: PM

MIANWALI (92 News) – Prime Minister (PM) Imran Khan on Sunday said that no country in the world has made progress without upholding accountability and merit. Addressing the 6th convocation ceremony of NAMAL College Mianwali, PM Khan said that the PTI government is answerable before the people of Pakistan and everyone in the government is accountable for spending public money. Accountability, meritocracy are hallmarks of democracy Criticizing the opposition, the prime minister mentioned that when the government launched accountability process, the thieves pronounced as democracy at own risk. He said that the democracy cannot go forward without accountability. Imran Khan said that accountability and meritocracy are the hallmarks of democracy and no country in the world has made progress without it. He said Pakistan could only make progress by pursuing the path of Holy Prophet (PBUH). Usman Buzdar to become best CM Lashing out at Opposition Leader in National Assembly Shehbaz Sharif for criticising Punjab Chief Minister Sardar Usman Buzdar, PM Khan said he will become the best chief minister. “Shehbaz Sharif said wrong things about Usman Buzdar,” the prime minister regretted while addressing the convocation of National University of Modern Languages (NUML). Praising Usman Buzdar, he said the incumbent Punjab chief minister would become the best chief executive of a province for he knew the sufferings of commoners. “Usman Buzdar won’t use the position to make quick bucks nor would he make his sons billionaires. He will use his power for the good of the people. PM vows to introduce modern technology in agriculture The prime minister lamented that the country’s farmers were not familiar with new technologies being used the world over to increase crop yield. “Our cow produces merely six litres milk while that in the US yields 26 litres. We don’t even utilise water and urea in a better way.” He vowed to introduce modern technology, especially in the agriculture sector, in the country for sustainable development.  “Accountability and meritocracy are the hallmarks of democracy and no country in the world has made progress without them”. PM advises students to pursue goal other than money Prime Minister (PM) Imran Khan emphasized on the importance of education and urged students to strive for achieving their career objectives. He advised the students to pursue goal other than money. "There are two types of views that exist in the world; the first asserts taking care of one’s own needs and then look after others, whereas the other urges to contribute one’s services for the state, and the leaders to look after the fundamental needs of the general public on the priority basis,” he said. PM Imran Khan also advised the students to learn from failures by rectifying mistakes. He also asked them not to forget their culture, religion and teachings of the founding fathers of Pakistan. He congratulated the successful graduates and their parents. PM admires 92 News Anchor Person Rauf Kalasra While addressing to the Naml College ceremony, Prime Minister Imran Khan also admired 92 News Anchor Person Rauf Klasra. “I always keep eye on my committed mistakes and Rauf Kalsra tells our [PTI government] mistakes in his programme [Muqabil],” he explained.