No date for Pakistan-India dialogue not a failure: FO 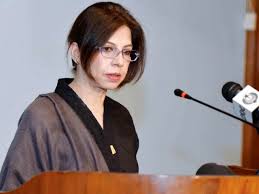 No date for Pakistan-India dialogue not a failure: FO

ISLAMABAD (92 News) - Foreign Office spokesperson Tasneem Aslam said on Thursday Indian foreign secretary’s visit was an ice breaker between the two countries and cannot be characterized as a failure. Addressing the weekly foreign office briefing, Tasneem Aslam said not fixing of a date for dialogue between Pakistan and India cannot be termed a failure, adding that talks between the secretaries paved a way for dialogue process. She said the meeting between Indian foreign secretary and his Pakistani counterpart was constructive and positive. The FO spokesperson said Pakistan suffered most in all South Asian countries affected by terrorism, and allegations hurled by India against Pakistan without evidence were inappropriate. “Cooperation from all countries is required to fight the menace of terrorism,” she added.