LAHORE (92 News) – Chief Justice Mian Saqib Nisar has said that there was no dishonesty in what he did, adding that he had struggled for rule of law in the country. Addressing a farewell ceremony hosted by the Lahore High Court Bar Association (LHCBA) on Friday, he said that he had not intervened in anyone’s task. The CJP said that people are not getting pure justice. “I have seen a lot of victims in the open courts. There are people who do not have money to spend medicines,” he maintained. He said that he had worked hard to achieve this status. “Pakistan is a great blessing of Allah Almighty.” CJP Mian Saqib Nisar said that he had laid the foundation of judicial activism for the welfare of humanity. “I have 56-year-old association with the Lahore High Court. My father also practiced here. I studied at Cathedral School and used to play in these corridors. People now are not getting justice that they used to get,” he said. 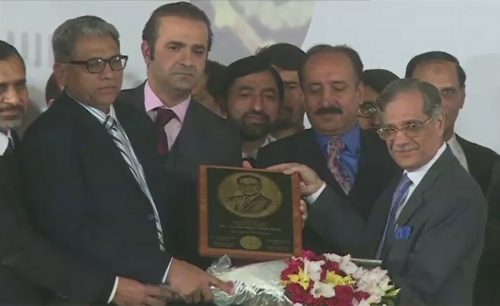 He said that he had visited hospitals to tell them that they lacked resources. “I did not perform anyone’s operation there. I did some mistakes willingly or unwillingly but there was no dishonesty in it,” he maintained. The CJP urged the judges not to consider it a job. “I wept a little in my life. Your love has made me to weep today,” he said. He said that today Section 22-A had made this court hostage. “It is not status of High Court that whether a case is being registered or not,” he said. The CJP disclosed that only two references are sub judice in the Supreme Judicial Council. “We will not let anyone to blackmail the judges. We are holding ourselves accountable and expect the same from you,” he added. The tenure of Chief Justice Mian Saqib Nisar is expiring on January 17. Justice Asif Saeed Khosa will assume the office of the CJP on January 18. President Dr Arif Alvi has approved the appointment of Justice Asif Saeed Khosa as the CJP.