LONDON (Reuters) - The transition period for Britain and the European Union to thrash out a trade deal will not be pushed beyond December, according to over two-thirds of economists polled by Reuters, resulting in a goods-only agreement when they part ways.
Negotiations on the future relationship are due to start early next month, but the two sides are already digging their heels in, and with less than a year to reach agreement some have questioned whether the time span is realistic. British Prime Minister Boris Johnson has pledged the transition period will not be extended beyond December, and 24 of 34 economists polled by Reuters Feb. 17-20 agreed. “The UK government is unlikely to want to cross what appears to be such a major red line by agreeing an extension. Instead, the government will likely try and secure a narrow trade deal in areas where the UK’s economic interests are best served,” said Peter Dixon at Commerzbank. As in all Reuters polls since a narrow majority of Britons voted to leave the EU in June 2016, the most likely future trading regime was an EU-UK free-trade agreement, over 90% of those polled said. In second place was no deal and trading under World Trade Organization rules. In last place was for Britain to remain a member of the European Economic Area, which would mean paying into the EU budget to retain access to the single market but having no say over policies. The median chance the transition period ends without a deal rose to 25% from 20% in a poll last month, and economists were less sure if a deal were struck whether it would cover both goods and services. Twenty-one of 34 said it would only encompass goods; 13 said it would also include Britain’s dominant service industry. “The UK is likely to prioritise manufacturing sectors, in particular, the auto industry, chemicals and machinery. However, trade in services is likely to be excluded, partly due to the complexity and lack of available time, but also due to the fact that the single market for services remains incomplete,” economists at Schroders told clients in a note. On Wednesday, a senior EU advisor said the bloc would determine Britain’s access to EU financial markets in the same way it has for Japan and the United States, and won’t give special treatment. 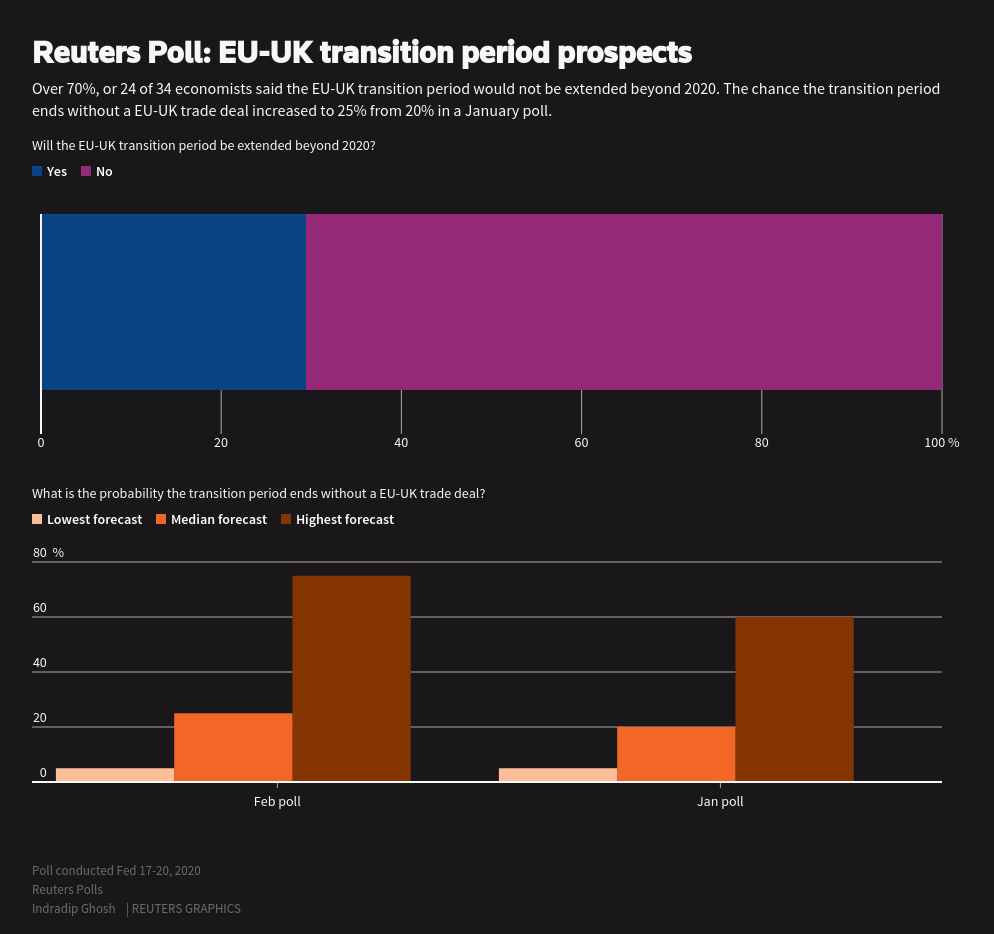 So far, Britain has mostly dodged the coronavirus sweeping across Asia that threatens global growth. Other Reuters polls have suggested the impact from the outbreak on both China and the United States will be short-lived. Market forecasters have largely been ignoring economic data when looking at the UK economy and instead have focused on the twists and turns of negotiations with the EU as they make their predictions. Growth is expected to be modest, with GDP expanding 1.0% this year and 1.4% next, the wider poll of 80 economists found. Inflation will average well below the Bank of England’s target this year at 1.6% before rising to 1.9% in 2021. On Jan. 30 - the eve of Brexit - the central bank kept borrowing costs steady at 0.75% as policymakers saw signs of a post-election pick-up in growth, which weakened the case for immediate action. It will stay at that level through to the end of 2021, medians in the Reuters poll found. 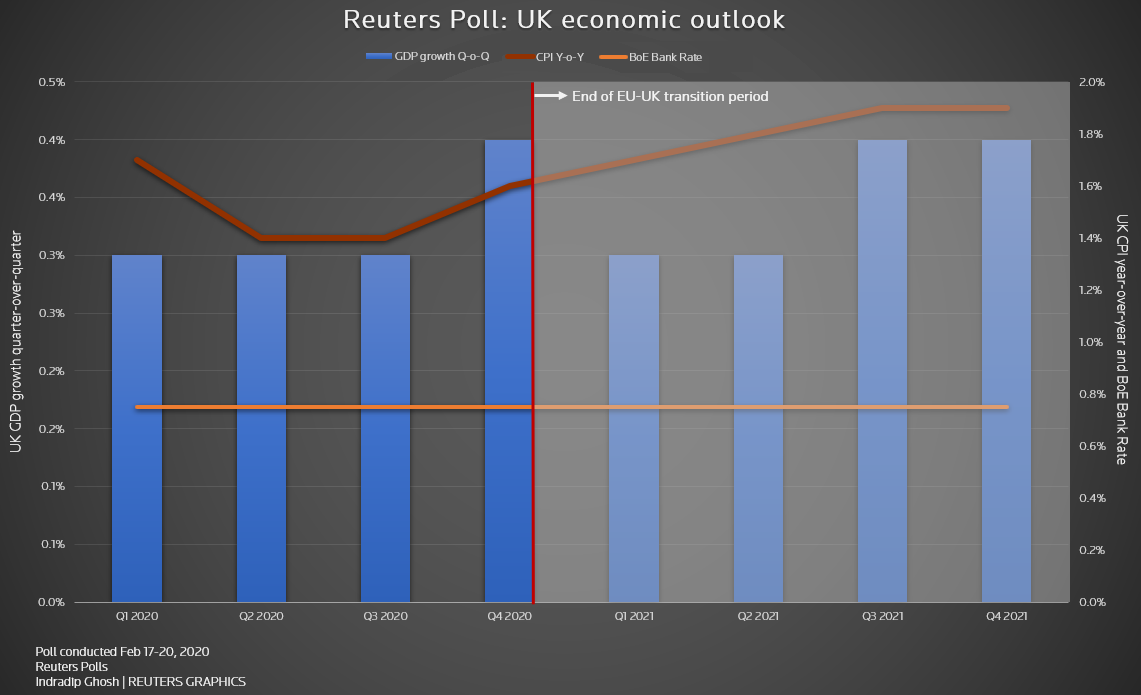 However, with many risks to the economic outlook, conviction as to where rates would be at the end of this year was low. Thirty-three respondents expected at least a 25-basis-point cut, 39 said there would be no change and two foresaw an increase to 1.0%. “The key unknown at present remains the risk the new coronavirus presents to global growth and therefore the UK economy,” said Victoria Clarke at Investec. “On this, the BoE will maintain its watching brief. For now, we remain relatively comfortable with our judgement that we will not see an adjustment in UK interest rates this year.”