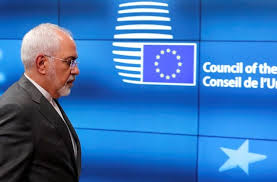 VIENNA (Reuters) – Nations that remain in the Iran nuclear deal meet on Friday for the first time since U.S. President Donald Trump left the pact, but diplomats see limited scope to salvage it after Washington vowed to be tougher than ever on Tehran. British, Chinese, French, German and Russian officials will try to flesh out with Iran’s deputy foreign minister a strategy to save the deal by keeping oil and investment flowing, while circumventing U.S. sanctions that risk hurting the economy. The 2015 accord rests on lifting sanctions and allowing business with Iran in exchange for Tehran curbing its nuclear program. The deal’s proponents say it is crucial to forestalling a nuclear Iran and preventing wider war in the Middle East. But US Secretary of State Mike Pompeo on Monday threatened the Islamic Republic with “the strongest sanctions in history” if it did not change its behavior in the Middle East. “Pompeo was like taking a cold shower,” said a European diplomat. “We’ll try to cling to the deal hoping that there is a possibility of a transaction, but we’re under no illusions.” At the heart of Friday’s talks, chaired by the European Union, Iranian officials will seek guarantees from the Europeans that they can protect trade. They will also want assurances that all parties will continue to buy Iranian oil. Iran’s supreme leader set out a series of conditions on Wednesday for Iran to stay in the deal. “This is a very important meeting that will show whether the other parties are serious about the deal or not,” an Iranian official told Reuters. “We will understand whether, as our leader, said, the European can give us reliable guarantees or not.” Highlighting how difficult it will be, the US Treasury announced Thursday more sanctions on several Iranian and Turkish companies and a number of aircraft in a move targeting four Iranian airlines. Some Western companies have already quit Iran or said they may have to leave because of US sanctions. Iran’s Foreign Minister Mohammed Javad Zarif said he expected the other signatories to present “a new package” that would be within the boundaries of the agreement, but did not include “any other issues.” Trump denounced the accord, completed under his predecessor Barack Obama, because it did not cover Iran’s ballistic missile program, its role in Middle East conflicts or what happens after the deal begins to expire in 2025. While European nations share those concerns, they have said that as long as Tehran meets its commitments, they would remain in the deal. The UN atomic watchdog policing the pact said on Thursday Iran continued to comply with the terms of the deal, but could be faster and more proactive in allowing snap inspections. “The European desire to remain in the agreement does not, however, detract from the concerns we have with regard to Iran,” France’s foreign ministry spokeswoman said on Thursday. “That is why we proposed to establish a comprehensive negotiating framework with Iran. We want Iran to understand the value of a cooperative approach.”