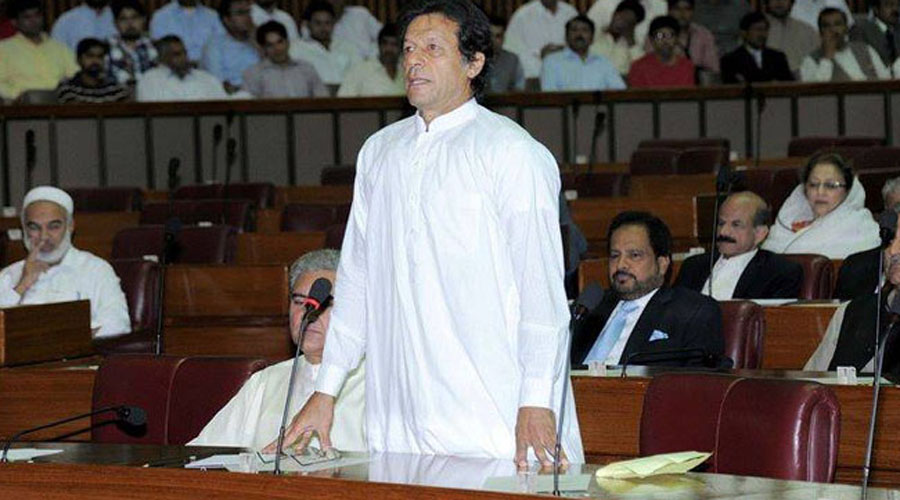 ISLAMABAD (92 News) – Pakistan Tehreek-e-Insaf (PTI) chairman Imran Khan has on Thursday refuses to accept Ayaz Sadiq as Speaker National Assembly and said that he will call him by his name instead of calling him NA speaker. Addressing the National Assembly session on Thursday, he criticized the NA speaker for forwarding the reference against him and said that action is being taken against the man who bring money in the country legally. “I no longer consider Ayaz as the National Assembly speaker due to his partiality," he said. Commenting on his assets, the chairman said that allegations are being leveled against him to silence him. “I have revealed all of my assets in the ECP in 2013,” he said. He further presented himself for accountability but said that Prime Minister Nawaz Sharif must also be held accountable. Khan also invited the opposition to be a part of movement against the government. Later, the opposition parties staged a walk out from the National Assembly, while the Pakistan People’s Party (PPP) leader Khurshid Shah also supported PTI chairman's decision, saying that they will also stage a walkout. However the PPP later returned to attend the session. Earlier, Pakistan Tehreek-e-Insaf (PTI) chairman Imran Khan said that even he had legally brought the money to the country but still a reference was filed against him. Talking to media at his residence in Bani Gala, he said that there is no sign of democracy in the country, adding that reference against him is baseless. Imran Khan said that Raiwind is not anyone’s property, adding that if anyone wants to come to Bani Gala to protest they can come. “Why can’t anyone talk about King Nawaz Sharif,” he added.