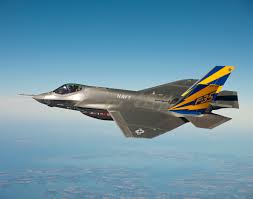 ABU DHABI (Reuters) - The United States expects no near-term sales in the Gulf region for the F-35 warplane, saying current fourth-generation military aircraft with new upgrades are capable of handling the threats the region faces, the Pentagon said on Sunday. "I do not anticipate any near-term sales for the F-35 in the region," Frank Kendall, US Undersecretary of Defense for Acquisitions, Technology and Logistics, told reporters in Abu Dhabi. "I think it would be a very sensitive sale to try to bring about for a lot of reasons." The F-35 Lightning II is built by Lockheed Martin Corp and is a so-called "fifth-generation" warplane designed to be nearly invisible to enemy radar. Kendall said the threats confronting the region can be dealt with adequately with current fleets such as United Arab Emirates’ 80 Block 60 F-16s. The country had requested these to be upgraded to Block 61, which would carry stand-off weaponry, and had also requested an additional 30 Block 61 aircraft. French firm Dassault Aviation sold 24 Rafale fighter jets to Egypt this month, triggering industry sources to say other regional governments might also consider the aircraft. A senior French source told Reuters last week that Qatar was in the final stage of negotiations regarding 36 Rafale jets. The UAE has also been assessing Eurofighter’s Typhoon, built by Britain, Germany, Italyand Spain. “This is a pretty good market for the fourth generation fighter planes and we’re not the only ones,” Kendall said. “The F-16s are competitive and we’re ready to prove the newest technology on those.”