No one can stop construction of dams in Pakistan: CJP Saqib Nisar 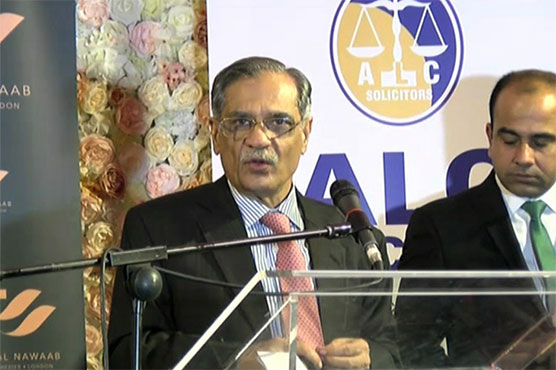 No one can stop construction of dams in Pakistan: CJP Saqib Nisar

LONDON (92 News) - Chief Justice of Pakistan (CJP) Justice Saqib Nisar on Thursday has once again reaffirmed commitment for the construction of dams in the country. Addressing a ceremony in connection with fundraising of Diamer-Bhasha dam at a hotel in London, Justice Nisar said, “No one can stop the construction of dams in Pakistan.” “Dam will be constructed at any cost. Pakistani people want to construct dam and the dam is essential in Pakistan,” the CJP remarked. He also said that all provinces are in agreement over the construction of Diamer-Bhasha and Mohmand Dams “Some people saying no dam will be constructed on Indus River. Why Diamer-Bhasha and Mohmand Dams will not be constructed? Several dams will be constructed on the Indus River and nobody can create obstacles in this pursuit,” he mentioned. CJ Nisar explained that that there is severe water crisis and he would not allow depriving people from their lives due to shortage of water. The top judge asserted that the water crisis will further worsen if immediate efforts are not taken to address it. “I have seen severe injustices in my country and seen people steal the rights of widows and orphans. We face human rights issues which are extremely painful,” he continued. The chief justice said that he has no political agenda and vowed to work for the welfare of the humanity after retirement. The chief justice is currently on a visit to the United Kingdom to raise funds for the construction of the Diamer-Bhasha and Mohmand Dams. He is expected to return to the country on November 28. The fundraising ceremony was arranged by lawyers, some charity organizations and overseas Pakistanis in London. A large number of Pakistan living abroad attended the event.