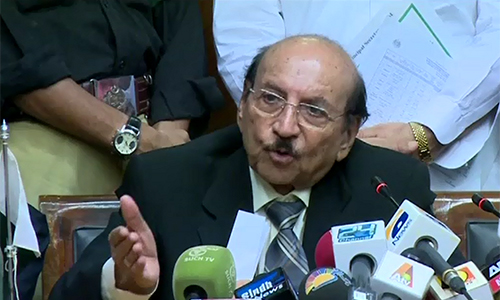 KARACHI (92 News) – Sindh Chief Minister Syed Qaim Ali Shah has said that no patriot can seek Indian interference. Addressing the cabinet meeting on Thursday, he said that there was less corruption in Sindh as compared to other provinces. “The NAB and the FIA are targeting Sindh in the name of corruption. The Sindh government’s media trial is being conducted in the name of corruption,” he said. The chief minister said that the FIA took away the KMC files without any reason. “We have complained the prime minister about it. The FIA will be held responsible if a single file of the land record went missing,” he said. “We question the NAB how many cases have been challaned. How many bargains have been finalized and how many recoveries have been made?” He said that the NAB and the FIA have attacked Sindh, which is violation of the law and constitution. The chief minister said that they are fully implementing the National Action Plan. He thanked Prime Minister Nawaz Sharif and COAS General Raheel Sharif for establishing peace in Karachi.