NEW DELHI (92 News) – Indian captain Virat Kohli has said that he will considered match against Pakistan as only cricket match, however, he does not have any personal opinion in this regard. Speaking in a joint press conference along with other captains in the tournament, Kholi said that the decision about playing with Pakistan solely rests with Board of Control for Cricket in India (BCCI). He said he doesn’t think that teams would be able to succeed in consistently achieving high scores in World Cup matches. Commenting about the match between Pakistan and India, he said certainly everyone has been waiting for June 16 when the two bitter rivals face off each other at Old Trafford Ground in Manchester. Kohli further clarified that for him, every World Cup match is equally important. He said he understands that England’s side would not be easy to compete with on their home turf. The Indian skipper mentioned that an event like this has its own pressure, which cannot be overlooked, hence a total of 270 runs would not be a bad score for any team. 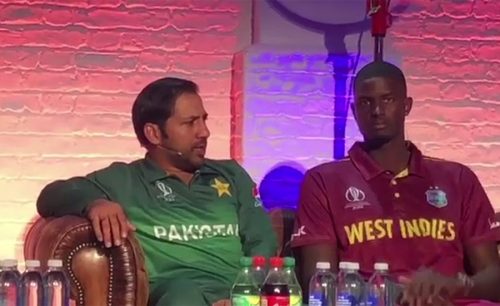 On the occasion, talking to the journalists in London, Pakistan skipper Sarfaraz Ahmed said that his team can defeat any opponent in the coming World Cup due to the fast bowlers' friendly pitches in England. He also said that the World Cup is not an easy tournament but his team's record is very strong in the country. “We won 1992 World Cup, Champions Trophy here. We have come here to prove ourselves in another challenge,” he said. “We have learnt a lot in the recent England series.” Sarfaraz said that the team is passionate to win the tournament and has the potential to deliver in all batting, bowling and fielding department. “We have addressed our shortcomings,” he said.