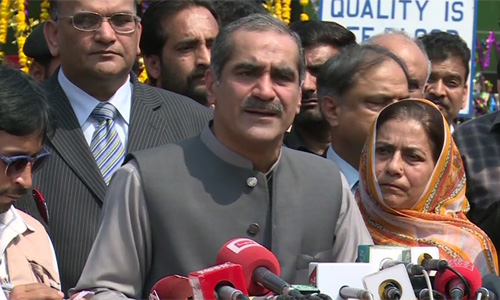 LAHORE (92 News) – Federal Minister for Railways Khawaja Saad Rafique has said that no political party chief has a right to criticize the army and the Chief of Army Staff (COAS). Talking to the media after a ceremony of the Pakistan Railways on Saturday, he said that the army works within the ambit of the constitution. “Altaf Hussain has admitted that criminals should not be part of the MQM,” he said. The minister said that the army is performing its duties efficiently and it is absolutely wrong to criticize agencies and law-enforcement institutions. He said that political parties should hold themselves accountable. He clarified that the government is not considering the option of governor rule. Saad Rafique said that the establishment of Judicial Commission is not a matter of defeat or victory for anyone. “The PTI has become a political party. Imran Khan is passing through the learning process,” the minister said. The minister said that they were striving to increase the capacity of the railways. “The engines are being increased,” he added.