No regrets for McIlroy as birdie blitz falls short 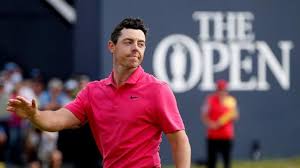 No regrets for McIlroy as birdie blitz falls short

CARNOUSTIE, Scotland (Reuters) - It was another case of what might have been in a major for Rory McIlroy after he threatened to deliver victory at the British Open on Sunday before settling for a tie for second place.
The 29-year-old Northern Irishman looked down and out in the closing round when bogeys at the second and fifth pushed him down the field in stiff breezes at Carnoustie that gusted up to 28mph. However, McIlroy produced just the sort of burst he has become renowned for.
Golf - The 147th Open Championship - Carnoustie, Britain - July 22, 2018 Northern Ireland's Rory McIlroy in action during the final round REUTERS/Andrew Yates
Birdies at the ninth and 11th restored his hopes before he celebrated wildly after sinking a 50-foot putt for an eagle three at the 14th. Ultimately, though, the four-times major champion fell short after a run of four straight pars over the brutal closing holes. “I’m not really frustrated,” McIlroy told reporters after a one-under 70 left him on six-under 278 overall, two behind champion Francesco Molinari of Italy. “I could have squeezed one more out of the round today. When I made the eagle on 14 it was tough to get close on 15, 16 and 17.
Golf - The 147th Open Championship - Carnoustie, Britain - July 22, 2018 Northern Ireland's Rory McIlroy reacts on the 18th during the final round REUTERS/Andrew Yates
“I think anything under-par out there today was a good score. I’m happy with how I played,” said McIlroy who has seven times finished in the top-10 in a major without winning since landing his last ‘Big Four’ title at the 2014 US PGA Championship. “I didn’t get off to a great start but I hung in there and battled back and just ran out of holes at the end,” he said. McIlroy said he was pleased to have played a minor role in a blockbuster round during which the lead changed hands several times, with former world number one Tiger Woods having a brief spell in top spot. “It was great just to be a part of it and hear the roars,” McIlroy added. “Tiger being back in the mix, everything, there were a lot of big names up there. “For a while I thought Tiger was going to win. My mindset was go and spoil the party. “I have no regrets. I played the way I wanted to play this week. It gives me a lot of encouragement going into the final major of the year.”