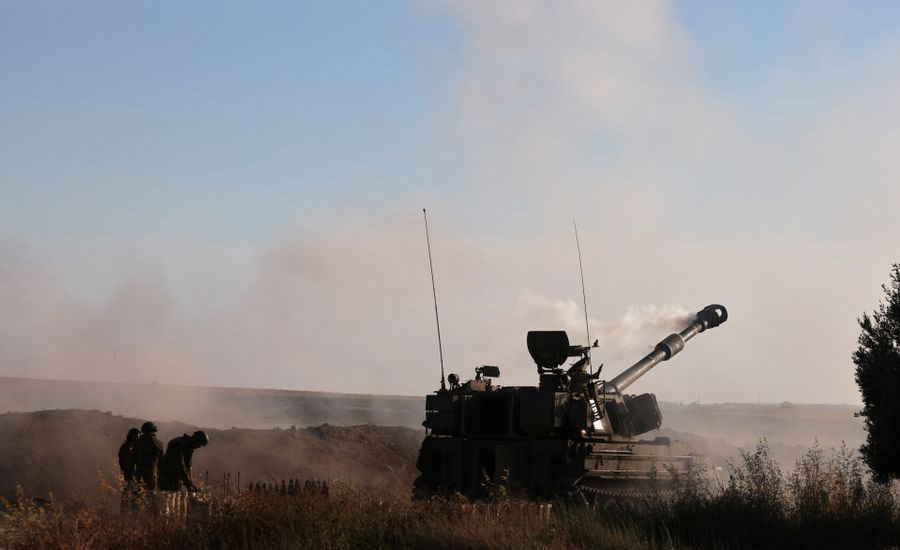 (Reuters) - Israeli forces pounded Gaza with air strikes and Hamas militants renewed cross-border rocket attacks on Wednesday, pressing on with a conflict that has caused widespread destruction in the Palestinian enclave and threatened cities deep inside Israel.

Gaza medical officials say 219 people have been killed since fighting flared on May 10, and Israeli authorities put the death toll in Israel at 12. Regional and U.S.-led diplomatic efforts to secure a ceasefire have intensified but so far failed.

In a 25-minute attack overnight, Israel bombarded targets including what its military said were tunnels in the southern Gaza Strip used by Hamas, the Islamist group that governs Gaza.

Nearly 450 buildings in densely populated Gaza have been destroyed or badly damaged, including six hospitals and nine primary-care health centres, and more than 52,000 Palestinians have been displaced, the UN humanitarian agency said.

The damage has left large craters and piles of rubble across the coastal enclave, and deepened long-running concerns about living conditions in Gaza.

"Whoever wants to learn about the humanity of the (Israelis) should come to the Gaza Strip and look at the houses that got destroyed on top of those who lived in them," said university lecturer Ahmed al-Astal, standing by the rubble of his house in Khan Younis in southern Gaza.

He said there had been no warning before his home was destroyed in an air strike before dawn.

Israel, which blames the latest hostilities on Hamas, says it issues warnings to evacuate buildings that are to be fired on and that it attacks only what it regards as military targets.

Israeli leaders said they were pressing on with the offensive against Hamas and Islamic Jihad, another militant group. An Israeli military spokesman said that, with an estimated 12,000 missiles and mortar bombs left in the Islamist groups' Gaza arsenal, "they still have enough rockets to fire".

Some 50 rockets were fired overnight from Gaza, the Israeli military said.

Sirens sounded in the coastal city of Ashdod, south of Tel Aviv, and in communities closer to the Gaza border, sending people scurrying to shelters. There were no reports of damage or injuries but days of rocket fire have unsettled many Israelis.

Hamas began firing rockets nine days ago in retaliation for what it said were Israeli rights abuses against Palestinians in Jerusalem during the Muslim holy month of Ramadan.
The rocket attacks followed Israeli security police clashes with worshippers at al-Aqsa Mosque in Jerusalem and a court case by Israeli settlers to evict Palestinians from a neighbourhood in Israeli-annexed East Jerusalem.

The hostilities are the most serious between Hamas and Israel in years, and, in a departure from previous Gaza conflicts, have helped fuel street violence in Israeli cities between Jews and Arabs.

Hamas' leading role in the hostilities poses a challenge to its main rival, West Bank-based President Mahmoud Abbas, who last month cancelled a parliamentary election in which the group appeared likely to make gains.

France called on Tuesday for a U.N. Security Council resolution on the violence. Diplomats said the United States told the Council a "public pronouncement right now" would not help calm the crisis.

"Our goal is to get to the end of this conflict. We are going to evaluate day by day what the right approach is. It continues to be that quiet, intensive behind-the-scenes discussions are tactically our approach at this time," White House press secretary Jen Psaki told reporters on Tuesday.

Egypt and U.N. mediators also stepped up diplomatic efforts, and the U.N. General Assembly will discuss the violence on Thursday.

Ezzat El-Reshiq, a member of Hamas' political bureau who is based in Qatar, issued a statement on Tuesday saying reports that it had agreed to such a ceasefire were untrue.

Israeli Prime Minister Benjamin Netanyahu reiterated in a post on Twitter on Tuesday that Israel's attacks "will continue for as long as it takes to restore calm" for all of its citizens.

Netanyahu said Israel's strikes had "set Hamas back many years" - which some Israeli news commentators took as a possible prelude to a ceasefire within days when he could claim victory.

But Amos Yadlin, a former Israeli military intelligence chief, said the picture was more complicated, citing civil unrest in Israel, mounting protests by Palestinians in the occupied West Bank and a trickle of rocket fire from Lebanon.

Gaza medical officials say the Palestinian death toll includes 63 children, and that more than 1,500 people have been wound 500 wounded since fighting began on May 10. Israeli authorities say the death toll in Israel includes two children.