No wish to exacerbate tensions with India: FM Qureshi

No wish to exacerbate tensions with India: FM Qureshi

NEW YORK (92 News) – Foreign Minister Shah Mehmood Qureshi said many word can be pronounced same like India to make Indo-Pak relation more worse because Pakistan has no wish to exacerbate tensions with India. Speaking to Indian media before attending the 73rd session of the United Nations General Assembly (UNGA), the foreign minister commented that Pakistan desired peace, good relation and bilateral ties with the neighbors. – PAKISTAN, US AGREE TO REBUILD TIES – 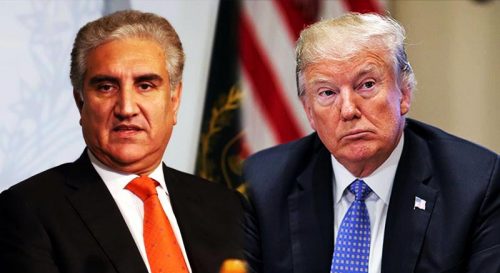 Pakistan and the United States have agreed to rebuild their bilateral relations for the benefit of the two countries. The agreement came during a meeting between Foreign Minister Shah Mahmood Qureshi and US President Donald Trump at a reception hosted by the later for the world leaders attending the UN General Assembly session in New York. Talking to national state-run TV channel after the meeting, Shah Mahmood Qureshi said that during the interaction he asked President Trump to rebuild the bilateral relations between Islamabad and Washington to which he responded positively. Qureshi also held an unscheduled meeting with US President Donald Trump when he was officially welcomed to the UN headquarters in New York, wherein the latter reiterated his intention to reset the US-Pakistan relations. The two exchanged thoughts on resuming bilateral talks, with Qureshi noting that Trump's approach seemed to be positive. He also held a discussion with US Secretary of State Mike Pompeo, although their official meeting is scheduled for October 2. Meanwhile, separately, the foreign minister met his counterparts from Turkey, China, Japan, Nepal, Switzerland, and Qatar. – QATAR OFFERS 100,000 JOB FOR PAKISTANIS – 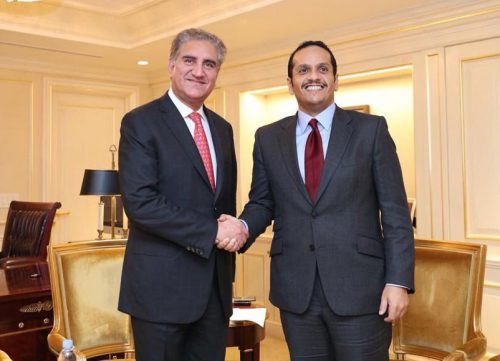 Pakistan and Qatar have vowed to strengthen bilateral ties by forging partnerships and enhancing economic and trade relations. The resolve was expressed during a meeting of the Foreign Minister Shah Mahmood Qureshi and his Qatari counterpart Mohammed bin Abdulrahman Al Thani on the sidelines of UN General Assembly session in New York. With the Qatari foreign minister, Qureshi talked about bolstering the two-way relations with Pakistan and, in response, Doha offered to provide 100,000 job opportunities to skilled Pakistani workers. The foreign minister welcomed increase in the bilateral trade by 53 per cent. He stressed the need to explore economic potential between the two countries by increasing exports in sectors such as food items, construction material, pharmaceuticals, medical equipment, sports goods and fabrics. The Qatari Foreign Minister emphasized on translating historic relations between the two countries into enhanced economic partnership. Both the sides reiterated to continue to work together at all fora for the advancement of common causes. – FM QURESHI MEETS WITH SWISS FM – 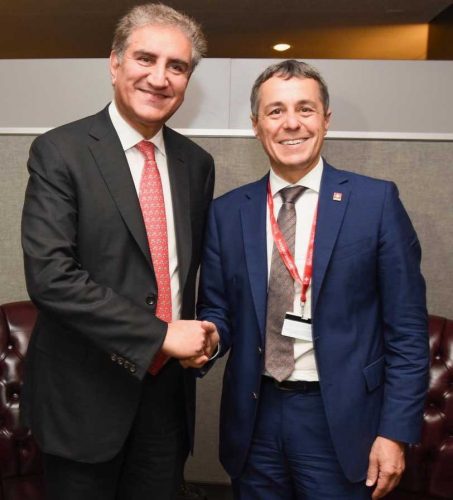 Foreign Minister Shah Mahmood Qureshi also met with his Swiss counterpart Ignazio Cassis and discussed a wide-range of regional and bilateral issues of mutual interest in New York. He appreciated the development work undertaken by the Swiss Agency for Development Cooperation (SDC) in the socio-economic sectors in Pakistan. – ADDRESSING ON "ACTION FOR PEACEKEEPING" AT UN –   FM Qureshi has assured that Pakistan will always be supportive of UN efforts to improve peacekeeping performance. He was speaking at a high level event on Action for Peacekeeping (A4P) hosted by the UN Secretary General Antonio Guterres in New York. The minister paid tribute to peacekeepers who are serving in volatile environments to complete their mandates. He highlighted that Pakistan has provided over 200,000 troops in 46 peacekeeping mission since 1960s and 156 of our bravest soldiers have given the ultimate sacrifice for the cause of peace He called for maintaining a balance between various components of peacekeeping missions. – ADDRESSING GATHERING OF BUSINESS LEADERS – 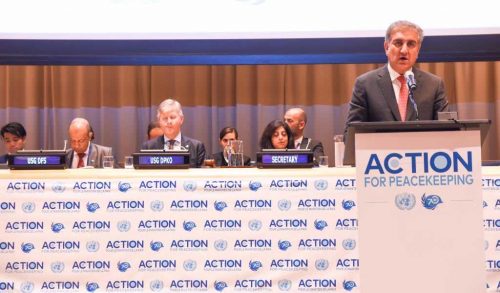 The foreign minister said that the government is committed to establish rule of law and eliminate corruption and red tapism from the country. Addressing a gathering of business leaders, think tank analysts and media persons organized by Atlantic Council in New York, he said it is priority of the government to generate employment opportunities for youth of the country. The minister also laid out his government's vision for a business friendly Pakistan. On the external front, the Foreign Minister outlined Prime Minister Imran Khan's approach of proactive engagement with neighboring countries for peace and stability in South Asia.