Nokia buys Alcatel to take on Ericsson in telecom equipment 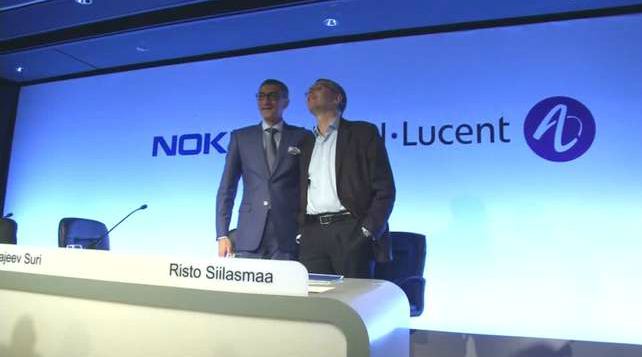 Nokia buys Alcatel to take on Ericsson in telecom equipment

PARIS - Nokia is to buy Alcatel-Lucent in an all-share deal that values its smaller French rival at 15.6 billion euros ($16.6 billion), building up its telecom equipment business to compete with market leader Ericsson. The deal will redefine a sector suffering weak growth prospects and pressure from low-cost Chinese players Huawei and ZTE. With about 114,000 employees and sales of around 26 billion euros, the combined company will rank a strong second in mobile equipment, with global market share of 35 percent, behind Ericsson at 40 percent and ahead of Huawei's 20 percent, according to Bernstein Research. The new Nokia will have stronger exposure to the important North American market, with major AT&T and Verizon contracts. It will also fill gaps in its product portfolio with Alcatel-Lucent's technology in optical transmission and Internet routers, which help telecom operators handle the ever-increasing volume of data brought on by users surfing the web on their smartphones and watching Netflix at home. While Huawei does have a complete product line across both fixed and mobile, Ericsson does not and may have to react with deal-making or partnerships, executives said. Nokia will give Alcatel-Lucent shareholders 0.55 shares in the combined company for each of their old shares, putting 33.5 percent of the entity in Alcatel shareholders' hands if the tender offer is fully taken up. The deal will be finalised in the first half of 2016 and is expected to result in 900 million euros of operating cost savings by the end of 2019, the companies said on Wednesday. Nokia shares fell 1.5 percent, adding to Tuesday's 3.6 percent fall, while Alcatel-Lucent fell 15.5 percent, giving up most of the gains it made on Tuesday when the talks were first acknowledged by the companies. Nokia initially approached Alcatel-Lucent about buying only the wireless business but was rebuffed, leading to the broader deal, Alcatel boss Michel Combes told Reuters in an interview. The deal carries significant risks, however. The track record of mergers in the sector - including the two that gave birth to Nokia and Alcatel-Lucent a decade ago - has been poor. Prior deals were plagued by the difficulty of cutting costs in an R&D intensive business, rivals stealing contracts while the companies were distracted by their integrations, and struggles over power within the married firms. Nokia CEO Rajeev Suri sought to reassure. "This is not a joint venture, so there will be no governance issues," he said on a call with investors. "We will take a no politics, no nonsense approach to running the business, and have learned from past mistakes." FRENCH JOBS PLEDGE Nokia pledged to keep France as "a vibrant center of the combined company" and not to cut jobs beyond what Alcatel had already planned, especially protecting research and development sites at Villarceaux and Lannion. Economy Minister Emanuel Macron said in a statement late on Wednesday that the overall jobs pledge would hold for two years after the deal closes. He and Alcatel's Combes also announced an extra 500 research jobs in France, adding to the existing 2,000. Alcatel has 6,000 employees in France. France made maintaining jobs a condition for its backing the deal, raising concerns over job cuts in Finland where Nokia employs about 6,900. "At first the deal sounded like very good news. But given that there will likely be job cuts, and the fact that it is much more expensive to lay off people in France than in Finland, the outlook is not that bright anymore," the head of the Finnish engineers' union, Pertti Porokari, said. "I truly hope that Finnish politicians would also show some patriotism here." The Finnish government did not demand that jobs be protected but underlined the Nordic country's know-how in technology. Nokia sold its once-dominant mobile handset business to Microsoft last year after struggling to compete with smartphones by Apple and Samsung. That deal left it with the network unit, a smaller map unit and a portfolio of technology patents. Nokia said its growth profile would be improved by the deal and predicted a sales growth rate of about 3.5 percent for 2014 to 2019. Nevertheless some investors remained concerned. "The integration will be a difficult task, it will easily take a year or two, and the management group must focus on it heavily. For an investor seeking returns this year, it is clear that Nokia looks less interesting after this move," said Juha Varis, a fund manager at Danske Capital whose fund owned 0.06 percent of Nokia shares as of end-March. He also said that leaving France out of the cost-cutting program must have a negative impact on the corporate culture. Other analysts, however, said that Nokia and CEO Suri had a good record on restructuring. "There is no reason to doubt that this deal too wouldn't increase shareholder value... We know that there are risks related to France and the cost cuts, but I believe that Nokia has calculated a margin of safety to the deal price," Nordnet brokerage strategist, Jukka Oksaharju, said. Separately, Nokia confirmed it was exploring the sale of its HERE mapping unit, which some analysts value at up to 6.9 billion euros. It also said further asset sales could be undertaken once the deal was completed. JPMorgan advised Nokia on the takeover, and boutique investment bank Zaoui & Co. advised Alcatel-Lucent. - REUTERS