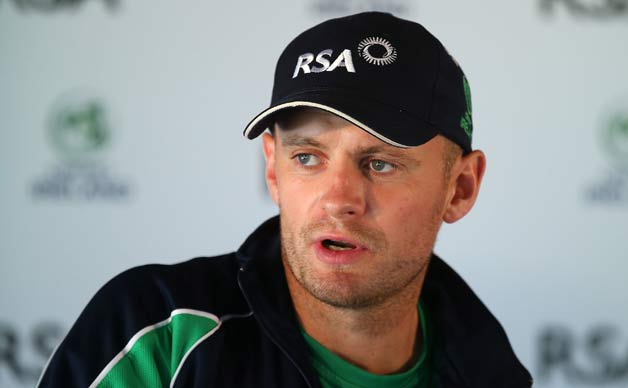 MELBOURNE (Reuters) - The four non-Test playing nations at the World Cup have performed well in cricket's global showpiece and it wouldn't be the same tournament with less teams, according to Ireland skipper William Porterfield. The International Cricket Council is chopping the 14-team format to one with 10 for the next World Cup, with the highest eight ranked teams qualifying automatically. Teams will vie for the other two spots at qualifying tournaments, making it harder for the likes of Ireland and Afghanistan to enter. Out of the four "associates", Ireland are the only team to win a match at the World Cup so far, though Afghanistan, United Arab Emirates and Scotland have been far from disgraced in their defeats. "I think it's frustrating whenever you come to tournaments and the governing body wants to keep cutting teams," Porterfield told reporters in Brisbane on Tuesday, a day before Ireland's match against UAE at the Gabba. "I think it's the only sport in the world that does that when it comes to world events. "Hopefully we (associates) can keep improving performances. Obviously, Afghanistan could have come out against Sri Lanka and Scotland have done reasonably well as well. "The way the UAE played against Zimbabwe as well posting 285, things could have gone quite differently. So the way the four teams who have qualified have performed so far in this competition has been great. We've got to keep that going, not only ourselves, but everyone else." With two pools of seven teams, the preliminary round sprawls for five weeks, with each team playing the other six before the knockout rounds finish the tournament in a hurry. The format has been criticised for being too long, but Porterfield, whose team rarely get to play international cricket against the best sides, dismissed the gripes. "It's a world event that happens once every four years," he said. "It's a major global event. Just to shorten it down, you have a Champions Trophy every couple of years. "I personally don't think it's that bad. But you have to look to expand the game."