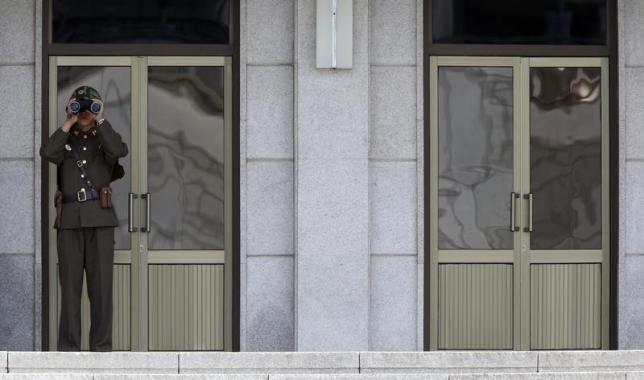 SEOUL - North Korea rejected on Friday accusations by South Korea that it was responsible for landmine explosions last week inside the Demilitarised Zone (DMZ) that wounded two South Korean soldiers. The South Korean military blamed Pyongyang for placing the mines in a neutral area within the heavily fortified DMZ, saying the area around the blast had been swept for mines and the terrain made it impossible for mines to have drifted due to rain or shifting soil. It also said wooden fragments from the exploded mines had paint used by the North and were consistent with mines that North Korea typically uses. "If South Korea wants to keep insisting this was our army's act, then show a video to prove it. If you don't have it, don't ever say 'North Korean provocation' again out of your mouth," North Korea's state KCNA news agency quoted the country's National Defence Commission as saying. North Korea's top defence body also said mines can explode due to natural causes such as rain and fire in the DMZ. The South Korean army has said that because of low visibility due to heavy rain and thick woods, surveillance cameras could not capture North Korean soldiers planting the mines. The South's military has threatened retaliation and resumed anti-Pyongyang propaganda broadcasts along the border via loud speakers. North and South Korea are technically still at war as the 1950-1953 Korean War ended in an armistice, not a peace treaty. The United Nations Command overseeing the armistice agreement asked the reclusive state for a meeting over the incident. The DMZ is a 4-km (2.5-mile) wide buffer fortified with landmines and barbed wire stretching across the Korean peninsula, with more than a million soldiers and heavy military equipment deployed on both sides. In another incident that led to a chill in North-South relations in 2010, Pyongyang denied any involvement in the sinking of a South Korean navy ship that killed 46 sailors, after South Korea blamed it for firing a torpedo at the vessel. -Reuters