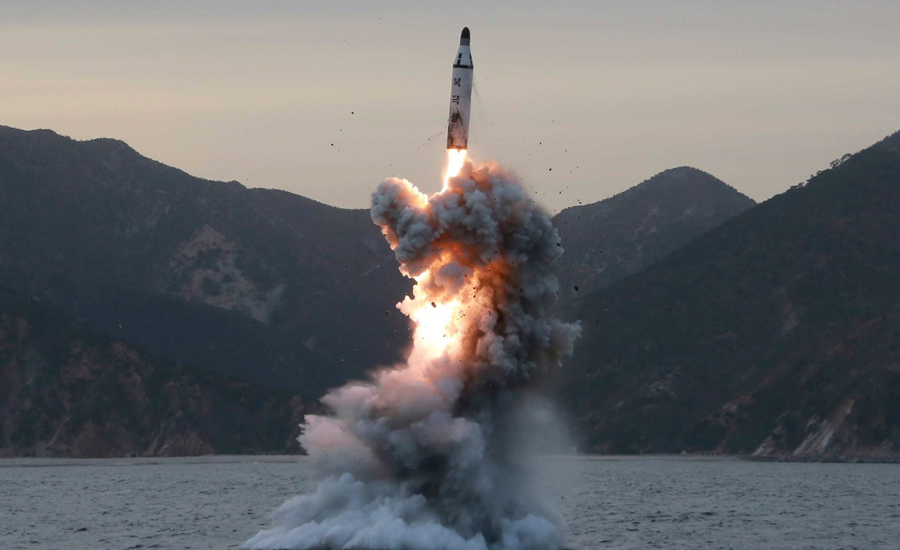 SEOUL - North Korea fired a ballistic missile on Sunday in defiance of calls to rein in its weapons programme, days after a new leader in its old rival South Korea came to power pledging to engage it in dialogue.

The US Pacific Command said it was assessing the type of missile but it was "not consistent with an intercontinental ballistic missile". Japanese Defence Minister Tomomi Inada said the missile could be of a new type.

The missile flew 700 km (430 miles) and reached an altitude of more than 2,000 km (1,245 miles), according to officials in South Korea and Japan, further and higher than an intermediate-range missile North Korea successfully tested in February from the same region of Kusong, northwest of its capital, Pyongyang.

North Korea is widely believed to be developing an intercontinental missile tipped with a nuclear weapon that is capable of reaching the United States.

US President Donald Trump has vowed not to let that happen.

An intercontinental ballistic missile is considered to have a range of more than 6,000 km (3,700 miles).

Experts said the altitude the missile tested on Sunday reached meant it was launched at a high trajectory, which would limit the lateral distance it travelled.

Kim Dong-yub, of Kyungnam University's Institute of Far Eastern Studies in Seoul, said he estimated a standard trajectory would give it a range of 6,000 km.

Japan said the missile flew for 30 minutes before dropping into the sea between North Korea's east coast and Japan. The North has consistently test-fired missiles in that direction.

"The launch may indeed represent a new missile with a long range," said Jonathan McDowell of the Harvard Smithsonian Center for Astrophysics, referring to the estimated altitude of more than 2,000 km. "It is definitely concerning."

In Washington, the White House said Trump "cannot imagine Russia is pleased" with the test as the missile landed closer to Russia than to Japan.

"With the missile impacting so close to Russian soil – in fact, closer to Russia than to Japan – the President cannot imagine that Russia is pleased," it said.

The launch served as a call for all nations to implement stronger sanctions against North Korea, it added.

Putin is in Beijing for a conference on a plan for a new Silk Road. Delegations from the United States, South Korea and North Korea are also there.

South Korean President Moon Jae-in, who took office on Wednesday, held his first National Security Council in response to the launch, which he called a "clear violation" of UN Security Council resolutions, his office said.

"The president said while South Korea remains open to the possibility of dialogue with North Korea, it is only possible when the North shows a change in attitude," Yoon Young-chan, Moon's press secretary, told a briefing.

Moon won Tuesday's election on a platform of a moderate approach to North Korea and has said he would be willing to go to Pyongyang under the right circumstances, arguing dialogue must be used in parallel with sanctions.

China, the North's sole main ally which nevertheless objects to its weapons programmes, called for restraint and for no one to exacerbate tension.

The launch will also complicate Moon's efforts to mend ties with China that have been strained by a decision by South Korea's former government to deploy a US anti-missile defence system aimed at defending against North Korea, but which China sees as a threat to its security.

Moon told Chinese President Xi last week that it would be difficult to resolve the issue unless North Korea stopped being provocative.

North Korea on Feb. 12, launched the Pukguksong-2 missile, an upgraded, extended-range version of its submarine-launched ballistic missile, from the same site.

South Korean and US military officials said the February launch was a significant development as it successfully tested a solid-fuel engine from a mobile launcher. The missile flew about 500 km with an altitude of 550 km.

The North attempted but failed to test-launch ballistic missiles four times in the past two months but has conducted various tests since the beginning of last year at an unprecedented pace.

Trump warned in an interview with Reuters in April that a "major, major conflict" with the North was possible but he would prefer a diplomatic outcome.

Trump has also said he would be "honoured" to meet North Korean leader Kim Jong Un under the right circumstances.

On Saturday, a top North Korean diplomat said it was open to dialogue with the Trump administration under the right conditions. -Reuters