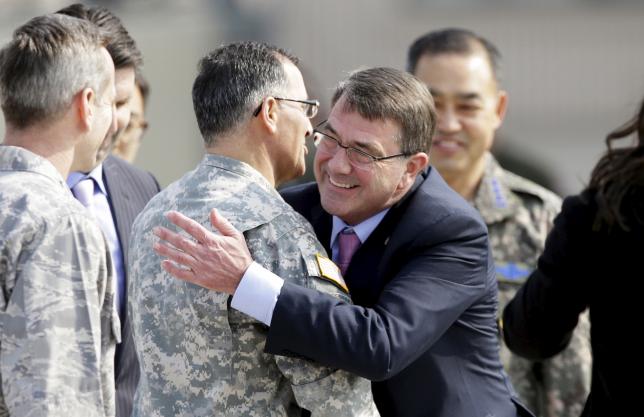 OSAN, SOUTH KOREA – North Korea has fired two surface-to-air missiles off its west coast, South Koreasaid on Thursday, with the latest in a string of short-range firings by the North coming shortly before the US defense secretary arrived in the region. The two short-range missiles were fired on Tuesday, South Korea's defense ministry said, and followed the launch on Friday of four short-range missiles off the west coast ofNorth Korea. US Secretary of Defense Ash Carter arrived in Japan on Tuesday afternoon and traveled to South Korea on Thursday, where he was expected to discuss a response to North Korea's growing missile and nuclear threat. "It's just a reminder of how tense things are on the Korean peninsula. That's the reason I’m going," Carter told reporters at Yokota air base in Japan before departing for South Korea. "If it was a welcoming message to me, I’m flattered." A senior US official described the missile test as a provocative act ahead of Carter's visit. "Their missile inventory is growing and their willingness to test those missiles appears to be growing as we've just seen today," the official said, speaking on condition of anonymity. US military officials have said a sophisticated air defense system is needed in South Korea to counter the North's missile threat, although Washington has not made a formal proposal for deploying THAAD and it is not officially on the agenda for Carter's visit. "These are missiles launched and it reinforces the missile defense preparations we’ve long had on the Korean peninsula and have here, by the way in Japan," Carter said when asked if the latest North Korean missile launch underscores the need for THAAD deployment in South Korea. China and Russia have both spoken out against placing THAAD, or Terminal High Altitude Area Defense, in South Korea. –Reuters