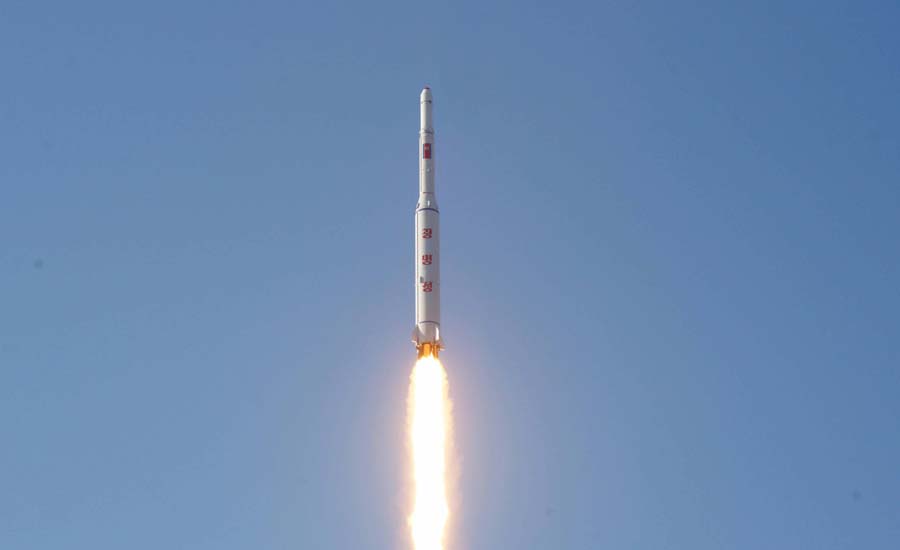 SEOUL - North Korea fired a ballistic missile into waters off its east coast on Sunday, South Korea and Japan said, a week after it tested an intermediate-range missile which experts saw as an advancement in the reclusive state's weapons programme.

The missile was launched at 0759 GMT from a location near Pukchang, 60 km (36 miles) northeast of the capital Pyongyang, an area where North Korea attempted to test-launch another missile last month but failed, South Korea's Office of Joint Chiefs of Staff said in a statement.

The missile flew about 500 km (310 miles), it said. Japan's Chief Cabinet Secretary Yoshihide Suga said the missile landed outside Japan's exclusive economic zone and no damage to ships or airplanes was reported.

An official travelling with US President Donald Trump in Saudi Arabia said the White House was aware of the launch and noted that the missile had a shorter range than the three previous tested by North Korea.

China had no immediate comment while both South Korea and Japan called emergency meetings of top officials.

It was the second missile test by North Korea since South Korean President Moon Jae-in took office 11 days ago. The two sides remain technically at war despite a truce ending their 1950-1953 conflict.

Last Sunday, the North tested-fired an intermediate range missile that flew further and higher than those previously tested.

Moon won this month's election on a platform of a moderate approach to North Korea and has said he would be willing to go to Pyongyang under the right circumstances, arguing dialogue must be used in parallel with sanctions.

North Korea has defied all calls to rein in its nuclear and missile programmes, even from China, its lone major ally, calling them legitimate self-defence.

It has been working to develop a nuclear-tipped missile capable of striking the US mainland.

On Saturday, it said it had developed the capability to strike the US mainland, although Western missile experts say the claim is exaggerated. "The US mainland and the Pacific operational theatre are within the strike range of the DPRK and the DPRK has all kinds of powerful means for annihilating retaliatory strike," North Korea's state KCNA news agency said in a commentary on Saturday. North Korea's official name is the Democratic People's Republic of Korea (DPRK). -Reuters