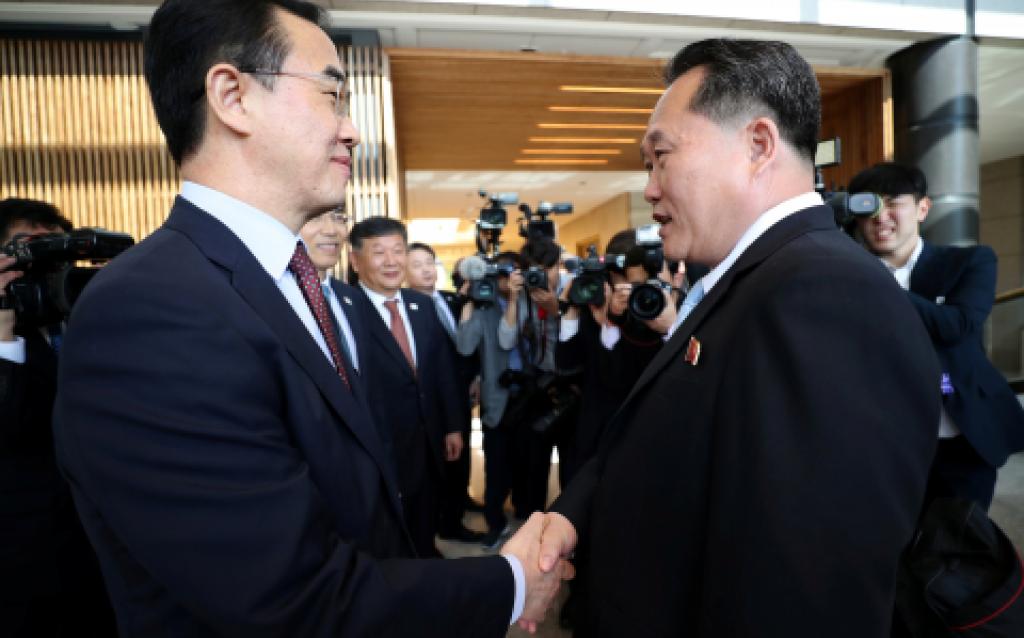 SEOUL (Reuters) - North Korea suggested during high-level talks on Friday that the two Koreas hold a joint celebration of the anniversary of a historic 2000 inter-Korean summit this month in the South, an official in Seoul said. The meeting in the border village of Panmunjom in the demilitarised zone that separates North and South Korea is the latest in a flurry of diplomatic activity intended to salvage a thaw in relations with the isolated North. North Korea had called off a planned meeting with the South last month in protest against US-South Korean air combat drills before South Korean President Moon Jae-in and North Korean leader Kim Jong Un revived it during a surprise second summit on Saturday. The meeting was led by South Korea’s Unification Minister Cho Myoung-gyon and Ri Son Gwon, chairman of the North’s committee for the peaceful reunification of the country. Both sides discussed ways to follow up on the agreement reached during the first summit between Kim and Moon in April that included working-level military, sports and forest cooperation, a unification ministry official told reporters. The North suggested that officials, politicians and private sector members from both sides should take part in the joint celebration of the first-ever inter-Korean summit, the official said. The South called for a swift launch of a joint liaison office in the North Korean border city of Kaesong, where the two Koreas operated a factory park together until its closure in 2016. North Korea agreed but said it needed some repair work because the facilities had been unused, the official said. Ri blamed Cho during the meeting for having incurred a “grave situation” that led to the North’s last-minute cancellation of last month’s talks. Ri did not give specific information but Pyongyang has lashed out at Seoul for allowing Thae Yong Ho, a former North Korean diplomat to Britain who defected to the South in 2016, to hold the launch of a book in parliament in which he describes Kim as “impatient, impulsive and violent”. The North also demands the repatriation of a dozen North Korean restaurant workers, who came to the South in 2016 via China, claiming that they were abducted by the South. Seoul has said they decided to defect of their own free will. “We don’t talk about what happened in the past. You just need to not repeat it again,” Ri said. He said another, unspecified issue that was not discussed in his talks with Cho in a January meeting had since become “a source of mistrust between the North and South”. “It is a very serious problem. Depending on how to lead public opinion, it would decide on whether a mood of reconciliation and cooperation, or mistrust and confrontation is created between the North and South,” Ri said. Cho said he agreed the sides should increase transparency over what is discussed in the talks and speed up efforts to improve bilateral relations.