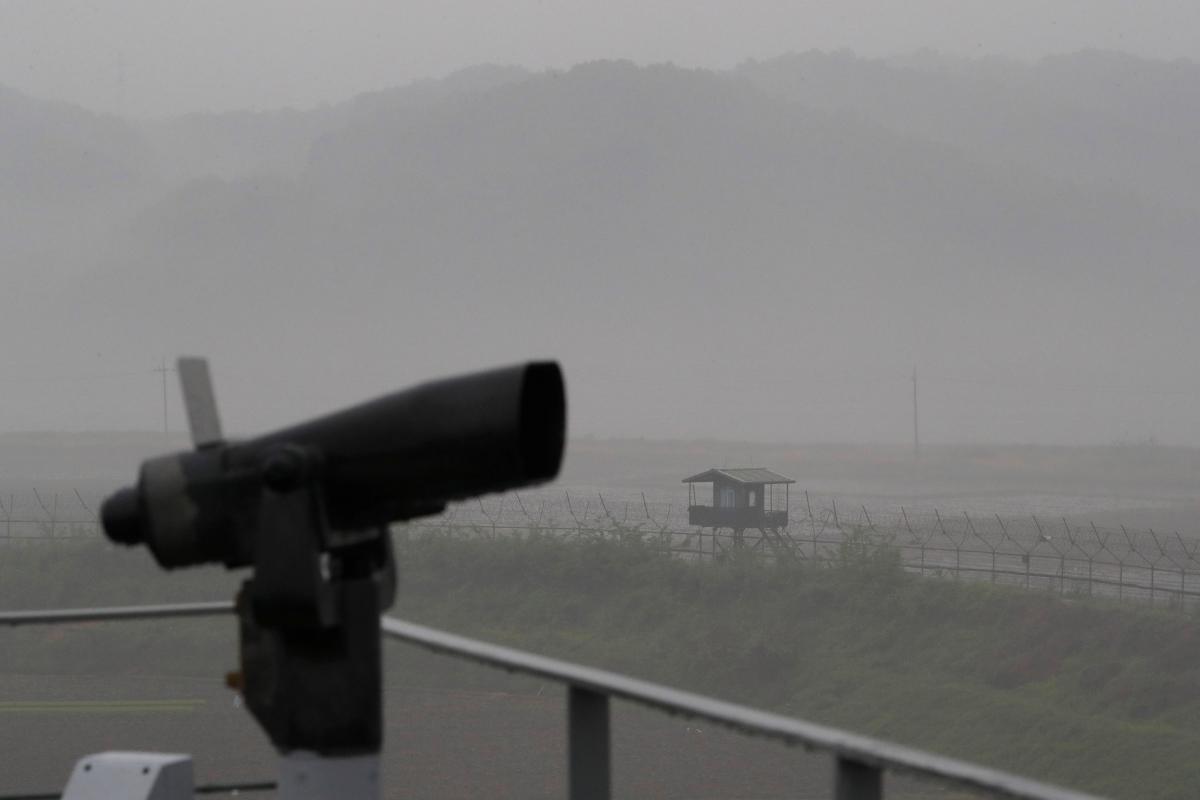 SEOUL (Reuters) - North Korea threw next month’s summit between Kim Jong Un and U.S. President Donald Trump into doubt on Wednesday, threatening weeks of diplomatic progress by saying it may reconsider if Washington insists it unilaterally gives up its nuclear weapons. The North’s official KCNA news agency said earlier Pyongyang had called off high-level talks with Seoul, which had been due on Wednesday, in the first sign of trouble after months of warming ties. Citing first vice minister of foreign affairs Kim Kye Gwan, KCNA later said the fate of the unprecedented US-North Korea summit, as well as bilateral relations, “would be clear” if the United States spoke of a “Libya-style” denuclearisation for the North. “If the U.S. is trying to drive us into a corner to force our unilateral nuclear abandonment, we will no longer be interested in such dialogue and cannot but reconsider our proceeding to the DPRK-U.S. summit,” Kim Kye Gwan said, referring to the North by its official name, the Democratic People’s Republic of Korea. Trump and Kim are scheduled to meet in Singapore on June 12. The vice minister specifically criticized U.S. national security adviser John Bolton, who has called for North Korea to quickly give up its nuclear arsenal in a deal that mirrors Libya’s abandonment of its weapons of mass destruction. North Korea clashed with Bolton when he worked under the Bush administration, calling him “human scum” and a “bloodsucker”. “We shed light on the quality of Bolton already in the past, and we do not hide our feeling of repugnance towards him,” vice minister Kim said.

U.S. Secretary of State Mike Pompeo said on Sunday the United States would agree to lift sanctions on North Korea if it agreed to completely dismantle its nuclear weapons program. However, Kim Kye Gwan’s statement appeared to reject that, saying North Korea would never give up its nuclear program in exchange for trade with the United States. “We have already stated our intention for denuclearisation of the Korean peninsula and made clear on several occasions that precondition for denuclearisation is to put an end to anti-DPRK hostile policy and nuclear threats and blackmail of the United States,” Kim said. North Korea has always defended its nuclear and missile programs as a necessary deterrent against perceived aggression by the United States, which keeps 28,500 troops in South Korea, a legacy of the 1950-53 Korean War. North Korea has long said it is open to eventually giving up its nuclear arsenal if the United States withdraws its troops from South Korea and ends its “nuclear umbrella” security alliance with Seoul, though South Korean officials have said the North may be willing to compromise. The United States has insisted on complete, verifiable, and irreversible dismantling of North Korea’s nuclear weapons and the facilities needed to build the weapons as soon as possible. Asian stock markets dipped after North Korea called off the talks with the South. Cancellation of the Singapore summit could see tension flare again even as investors worry about China-U.S. trade friction. “This will weigh on the Korean reconstruction beneficiaries that have had a strong run on peace and even reunification hopes recently,” JPMorgan analysts wrote in a note. South Korean Foreign Minister Kang Kyung-hwa spoke to Pompeo by telephone and discussed North Korea’s postponement of the talks with the South, the foreign ministry said in a statement. Pompeo told Kang Washington would continue to make preparations for the U.S-North Korea summit, bearing in mind the recent action by North Korea, it said. Kim Kye Gwan’s statement came only hours after North Korea denounced the U.S.-South Korean military exercises as a provocation and pulled out of the talks with the South. Earlier KCNA denounced the “Max Thunder” air combat drills, which it said involved U.S. stealth fighters and B-52 bombers. American stealth F-22 fighters were spotted in South Korea earlier in May, but a spokesman for the U.S. military command in South Korea said no B-52s were scheduled to take part in the drills. Neither B-52s or B-1B bombers were present at last year’s Max Thunder drills, according to a South Korean defense ministry official. The drills would go on as planned and were not aimed at any third party, the ministry said.

Cancellation of the first meeting between a serving US president and a North Korean leader, would deal a major blow to what would be the biggest diplomatic achievement of Trump’s presidency. Trump has raised expectations for success even as many analysts have been skeptical about the chances of bridging the gap due to questions about North Korea’s willingness to give up a nuclear arsenal that it says can hit the United States. Kim Kye Gwan derided Bolton’s suggestion that discussions with North Korea should be similar to those that led to components of Libya’s nuclear program being shipped to the United States in 2004. “(The) World knows too well that our country is neither Libya nor Iraq which have met miserable fate,” Kim said. “It is absolutely absurd to dare compare the DPRK, a nuclear weapon state, to Libya which had been at the initial stage of nuclear development.” The outburst could be aimed at testing Trump’s willingness to make concessions ahead of the summit, which is to be preceded by a visit to Washington next week by South Korean President Moon Jae-in. A US government expert on North Korea said Kim Jong Un may also be trying to gauge whether Trump is willing to walk away from the meeting. Joshua Pollack, of the Middlebury Institute of International Studies in California, said Pyongyang appeared irritated by the U.S. administration’s vow to maintain sanctions in spite of North Korean concessions. “The North Koreans want a change in tone from the US, and at least so far, they’re not hearing one,” he said. The doubt thrown over the summit comes a week after Trump abandoned the 2015 nuclear deal between Iran and six world powers, under which Tehran curbed its nuclear program in exchange for the lifting of most international sanctions. China said on Wednesday all parties “should show goodwill and avoid mutual provocation” to create a conducive atmosphere for denuclearisation on the Korean peninsula. The North-South talks had been due to focus on plans to implement a declaration that emerged from an inter-Korea summit last month, including promises to formally end the Korean War and pursue “complete denuclearisation”.