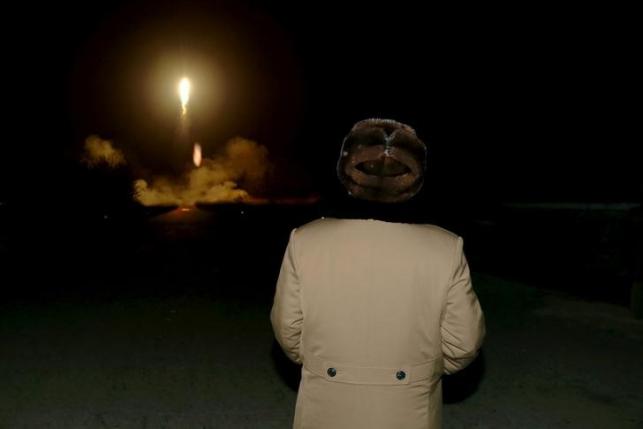 SEOUL – North Korea said on Wednesday it had conducted a ballistic missile test that simulated preemptive strikes against South Korean ports and airfields used by the U.S. military, a likely reference to the launches of three missiles on Tuesday. The North's leader, Kim Jong Un, supervised the exercise that successfully tested the simulated detonation of nuclear warheads mounted on missiles, its official KCNA news agency reported. It did not give the date of the exercise, as it customarily reports activities of its leader without dates or locations. Rodong Sinmun, the ruling Workers' Party's official newspaper, carried photographs of Kim with military aides, apparently observing a ballistic missile exercise. North Korea fired three ballistic missiles that flew between 500 km and 600 km (300-360 miles) into the sea off its east coast, South Korea's military said, in defiance of UN Security Council resolutions and the latest in a series of provocative moves by the isolated country after a series of nuclear weapons tests. "The drill was conducted by limiting the firing range under the simulated conditions of making preemptive strikes at ports and airfields in the operational theater in South Korea where the U.S. imperialists' nuclear war hardware is to be hurled," KCNA said. "And it once again examined the operational features of the detonating devices of nuclear warheads mounted on the ballistic rockets at the designated altitude over the target area." Yang Uk, a senior researcher at the Korea Defence and Security Forum and a policy adviser to the South Korean navy, said there was little firm evidence to suggest the North had succeeded in developing a nuclear warhead for missiles. "But it's a reminder that they are continuing to pursue nuclear warhead development, and that itself is an escalation of risks for us," he added. Tuesday's missile launches were seen as a show of force a week after South Korea and the United States chose a site in the South to deploy the Terminal High Altitude Area Defence (THAAD) anti-missile system to counter threats from the North. North Korea had threatened a "physical response" to the move. "The idea seems to be to signal that (U.S.) war plans cannot succeed because if we activated them, the North Koreans would strike as we made the attempt," said Joshua Pollack, editor of the U.S.-based Nonproliferation Review. Late on Tuesday, North Korean state media called U.S. Ambassador to South Korea Mark Lippert a "mentally deranged hooligan" and "a heinous war maniac" for flying in a U.S. fighter jet earlier this month. Reclusive North Korea occasionally publishes insults of U.S. and South Korean officials. The North and the rich, democratic South are technically still at war because their 1950-53 conflict ended in an armistice, not a peace treaty. The North regularly threatens to destroy Japan, South Korea and the South's main ally, the United States. The U.S. air force said Lippert flew in a familiarization flight in an F-16 on July 12 to gain better understanding of the U.S. and South Korea's joint defense against North Korea. –Reuters