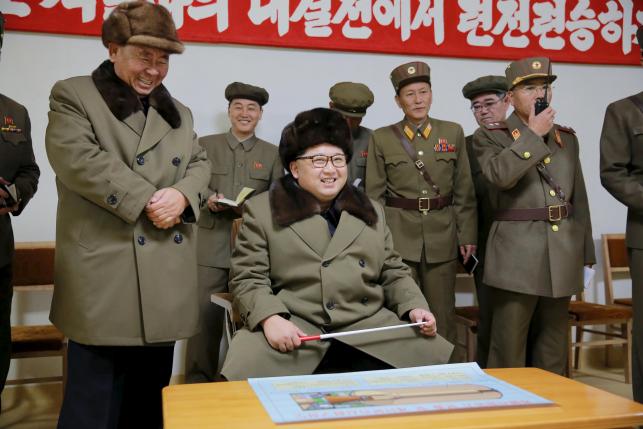 SEOUL - North and South Korea, locked for weeks in exchanges of angry rhetoric and heightened military readiness, traded more threats on Friday, with Pyongyang saying its military had trained to attack Seoul's presidential Blue House. Isolated North Korea is renowned for its sabre-rattling, and often makes threats of attack and even annihilation against South Korea and the United States. However, its tone has been especially belligerent in recent weeks and personally aimed at South Korean President Park Geun-hye following her warnings of regime collapse in Pyongyang after it conducted a nuclear test and rocket launch earlier this year. North Korea's leader Kim Jong Un guided what state media said on Friday was the North's largest ever exercise of long-range artillery training, with a simulated attack on South Korea's presidential and government offices. Kim ordered his military to be on high alert "so that it may mercilessly pound the reactionary ruling machines in Seoul, the cesspool of evils, and advance to accomplish the historic cause of national reunification, once it receives an order for attack," the official KCNA news agency said. Tensions have been high on the Korean peninsula since the North conducted a nuclear test in January and a long-range rocket launch in February, which prompted new sanctions earlier this month by the United Nations Security Council. Annual US-South Korea military exercises, which are ongoing, have added to the jitters. The tensions also come ahead of a rare congress of the North's ruling Workers' Party in May. Some analysts expects Kim to claim a signature achievement, such as another nuclear test, in the run-up to the congress as he looks to bolster his stature at home. Park warned the North to end provocative actions and "escape from the illusion" that it will benefit from nuclear armament, ordering her country's military to maintain "maximum combat power." "Reckless provocation will be the road to destruction for the North's regime," Park said at an anniversary event for the 2010 sinking of a naval ship that killed 46 people. The South blames the sinking on a torpedo attack by the North, which denies any role. The North conducted its fourth nuclear test in January, saying that it had successfully tested a hydrogen bomb although many experts doubt the claim. But some US intelligence analysts now believe the North "probably" possesses a miniaturised nuclear warhead, CNN reported on Friday, citing several unnamed US officials, although the assessment is not the consensus view of the US government. But even those officials say they still do not know if such a device would actually work, CNN said. Rocket experts have said the North has yet to demonstrate it can launch a ballistic missile mounted with a nuclear warhead that can sustain the stress of atmospheric re-entry and then be guided to hit a target with reliability. -Reuters