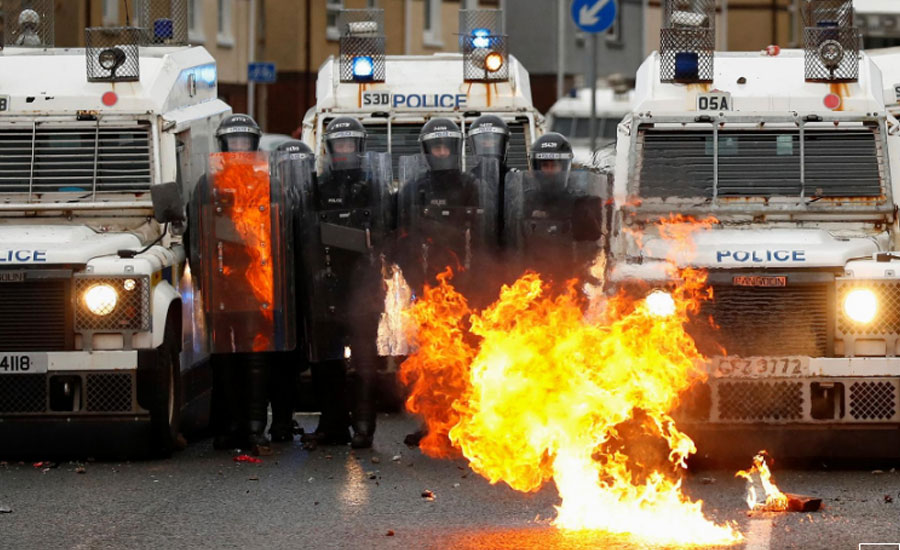 BELFAST (Reuters) -Northern Ireland’s power-sharing government put aside factional differences on Thursday to call for calm after frustration among pro-British unionists over post-Brexit trade barriers helped trigger some of the worst violence in the region in years.

Despite the appeals, clashes spread further into Irish nationalist areas on Thursday night where police responded to petrol bomb and stone attacks with water cannon. The White House joined the British and Irish governments in urging calm.

Hundreds of youths in the British province’s capital Belfast set a hijacked bus on fire and attacked police with stones on Wednesday in scenes reviving memories of decades of sectarian and political strife that claimed some 3,600 lives prior to a 1998 peace deal.

A week of violence has injured 55 police officers and seen boys as young as 13 and 14 arrested on rioting charges.

“We are gravely concerned by the scenes we have all witnessed on our streets,” the compulsory coalition, led by rival pro-Irish Catholic nationalists and pro-British Protestant unionists, said in a statement.

“While our political positions are very different on many issues, we are all united in our support for law and order and we collectively state our support for policing,” the statement said.

The British and Irish Prime Ministers held talks, while the White House press secretary said the Biden administration was concerned. The U.S. State Department warned that the Good Friday Agreement, the 1998 peace accord, must not become “a casualty” of Brexit.

Irish nationalists Sinn Fein and others accused First Minister Arlene Foster’s Democratic Unionist Party of inflaming hostilities with their opposition to the new trade barriers that their supporters feel erase part of their UK identity.

After London left the European Union’s (EU) orbit at the start of this year, checks and tariffs were introduced on some goods moving from mainland Britain to Northern Ireland as the province was now bordering the bloc via EU member Ireland.

Prime Minister Boris Johnson had promised there would be no hard border between Ireland and Northern Ireland as result of Brexit, and unfettered trade between the province and the rest of the United Kingdom.

But critics of the departure deal’s Northern Ireland Protocol say a border is now in effect in the Irish Sea, leaving unionists feeling betrayed by London.

Johnson on Thursday dispatched his Northern Ireland minister Brandon Lewis to Belfast for talks with political and community leaders in a bid to calm the situation.

“I absolutely understand the challenges ... that people of the Unionist community have felt around the protocol” and other issues, Lewis told journalists after the talks. But “there is no legitimization or excuse to take to violence.”

The DUP has also pointed to a police decision last week not to prosecute Sinn Fein for a large funeral last year that broke COVID-19 regulations. They called for Northern Ireland’s police chief to step down over the matter, but the party’s leader Arlene Foster met him on Thursday in a bid to defuse tensions.

Irish Foreign Minister Simon Coveney said a number of factors were responsible for the anger and that the post-Brexit trading arrangements were clearly one of them.

Much of Northern Ireland remains deeply split 23 years after the Good Friday deal. Many nationalists aspire to unification with Ireland while unionists want to stay in the United Kingdom.

Police said on Thursday that in some instances adults had stood applauding and shouting support while youngsters committed crimes of violence.

On Wednesday, Irish nationalist and pro-British loyalist groups threw fireworks, bricks and petrol bombs at each other from either side of one of Belfast’s so-called “peace walls” that have divided the two communities in parts of the city since the Northern Ireland’s “Troubles” began.

Thursday’s clashes between nationalists and police took place nearby but were far more muted and part of the crowd dispersed under heavy rain.