‘Not my prime minister!’: Anti-Boris Johnson protesters rally in London 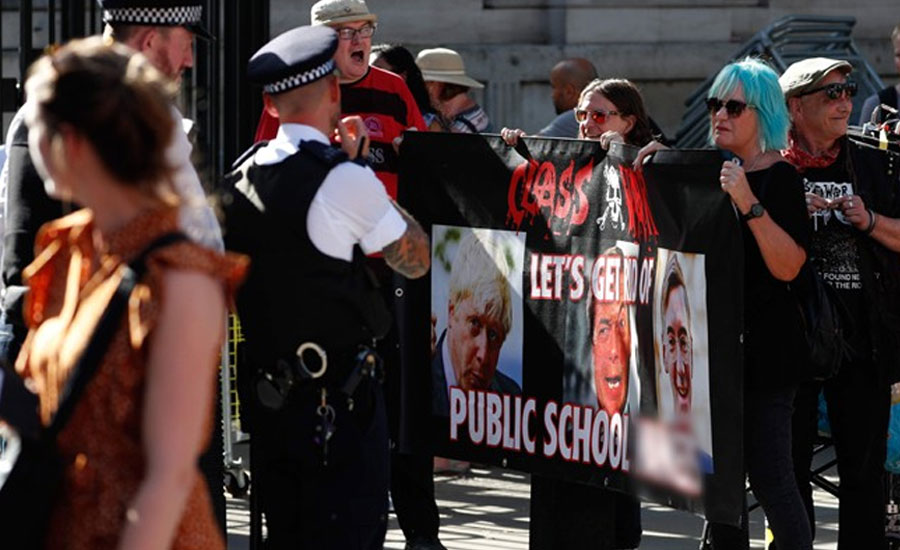 ‘Not my prime minister!’: Anti-Boris Johnson protesters rally in London

LONDON (AFP) – Hundreds protested against British Prime Minister Boris Johnson on Wednesday at an expletive-themed rally in central London, hours after he was confirmed as the country's new leader. Organisers had commandeered a vintage open-top red London bus for the "[expletive] Boris" protest, installing DJ decks to blast out music and swear word-filled speeches from Johnson critics. I'm here to protest against Boris Johnson's policies," Andy Unger, a university professor in London, told AFP as the youthful crowd cheered various addresses by activists. "We've gone into an age in politics where facts don't matter and Johnson has been spectacularly successful in exploiting that. "I just don't think he's the right person to be prime minister — he's not my prime minister," he added. Attendees, holding an array of placards — emblazoned with slogans like "kick Johnson out!" and "wake me up from this nightmare" — marched around the streets of Bloomsbury after first rallying in Russell Square by the University of London campus. The "street festival" demonstration was supported by various progressive groups, including Momentum, the left-wing campaign organisation closely aligned with the main opposition Labour Party. Shadow finance minister John McDonnell was among those to address the crowds. "Do not fall for this buffoonery: Boris Johnson is dangerous," he warned, in reference to the new premier's trademark bombastic style. "He's dangerous for our communities, he's dangerous for our society, he's dangerous for the rest of Europe and our globe as well." Valentina Frasca, of south London, was another to turn out with family members. "I dislike Boris a lot," said 37-year-old teacher. "He's a racist and a xenophobe, he's a liar, he's not a leader. "I know how Americans feel now — I feel quite embarrassed," she added, in reference to those similarly opposed to US President Donald Trump. A day earlier, Boris Johnson took office as Britain’s new prime minister. “The Queen received in audience The Right Honourable Boris Johnson MP this afternoon and requested him to form a new administration,” Buckingham Palace said. “Mr Johnson accepted Her Majesty’s offer and kissed hands upon his appointment as Prime Minister and First Lord of the Treasury,” it added.