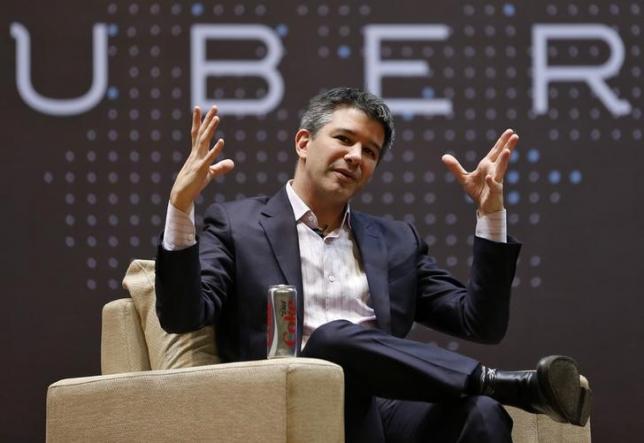 BERLIN - A promised showdown between the chief executives of German luxury car maker Daimler (DAIGn.DE) and ride-sharing firm Uber, Silicon Valley's most valuable private company, turned into more of a wary courtship when the two met publicly. Daimler Chief Executive Dieter Zetsche and Uber Chief Executive Travis Kalanick were interviewed together on stage at Axel Springer NOAH, a two-day conference in Berlin of venture capitalists and technology companies. Both ruled out the prospect of one taking over the other and denied a German magazine report in March that Uber was considering ordering up to 100,000 cars from the automaker. They sought common ground in many of their comments, while taking good-natured jabs at one another as inevitable competitors. "Cars are not going away soon and companies like Uber are not going to be making them," Uber's Kalanick said. Zetsche said he had met Kalanick several times and described him as a "frenemy", which he defined as a combination of friend and enemy, before joking "We call that marriage in German." Turning more serious, the Daimler executive said: "We are competitors, of course. There might be many areas where we are competitors in the future," but added they were also friends. The rise of car-sharing is widely seen as a long-term threat to individual car ownership by many potential drivers, reducing long-term demand for new cars from automakers. Daimler has responded by investing in a variety of new car-sharing and connected car businesses that potentially compete with Uber. With this month's announcement of a $3.5 billion investment in Uber by a Saudi Arabian sovereign wealth fund and a partnership deal with automaker Toyota Motor Corp (7203.T) which also included an investment stake for an undisclosed amount, Uber's private market valuation has soared. At $62.5 billion, the car-sharing firm is now potentially worth more than the stock market capitalizations of automakers BMW, GM and Honda and close to those of VW, Daimler and Ford. Toyota, the world's most valuable car maker is worth around $172 billion at current stock prices. When asked whether Daimler would consider taking a stake in Uber, Zetsche said his company only makes strategic investments it controls, while Kalanick said he would not be interested in Daimler taking a "dominant" position in Uber. JUSTIFY YOUR VALUATION: DAIMLER CEO In one of the testier moments, Zetsche asked Kalanick to justify how Uber was worth roughly as much as Daimler's $70 billion stock market capitalization, despite being a seven-year old company that has never produced a profit. Kalanick repeated recent comments that Uber is profitable in at least 200 cities it operates in, but is investing heavily in markets like China: "In the developed markets we are profitable, in the developing markets, we are massively unprofitable.” Uber entered its 467th city in Accra, Ghana, this week. An on-stage interviewer asked him whether his investors ever ask him when he plans to become profitable. Kalanick acknowledged that, yes, "sometimes investors ask". The Uber chief said it was largely a matter of entering enough cities, for long enough, to generate the volume of usage of its online taxi and car-sharing services to turn a profit. Kalanick, who earlier this year in a TV interview ruled out seeking a public stock market listing for his company this year, reiterated that "We are going to IPO as late as possible." The moderator demanded to know how many years before Uber would hold an initial public offering. Kalanick replied: "It is going to be somewhere between one year and 10," appearing to reopen the door to a possible IPO as early as next year. The two executives were both asked whether Uber had ordered 100,000 self-driving cars from Daimler, as Manager Magazin reported in March. Reuters later confirmed that Uber had sounded out automakers, according to an auto industry source. Travis denied this, saying: "I have not signed a $10 billion cheque to buy 100,000 S-Classes" referring to Daimler's flagship car model. Zetsche quickly followed by saying, "No, I can't" confirm the report that Uber was considering the massive order. Asked about his on-going legal battles with local regulators in Germany, Kalanick said he often reminds European regulators when he meets with them that the same legal issues came up previously in the United States and were eventually settled. A state court in Germany ruled Uber's alternative taxi service using non-professional drivers illegal last year. "I am very patient here in Germany," Travis said. Kalanick and Zetsche initially were chauffeured up to the stage in a bright yellow Trabi, a vintage four-door sedan that was once the most popular car made in the former East Germany. "I have got to get a couple of those cars on the system," Kalanick said of the idea of supplying Trabis to Uber drivers to transport local passengers. -Reuters