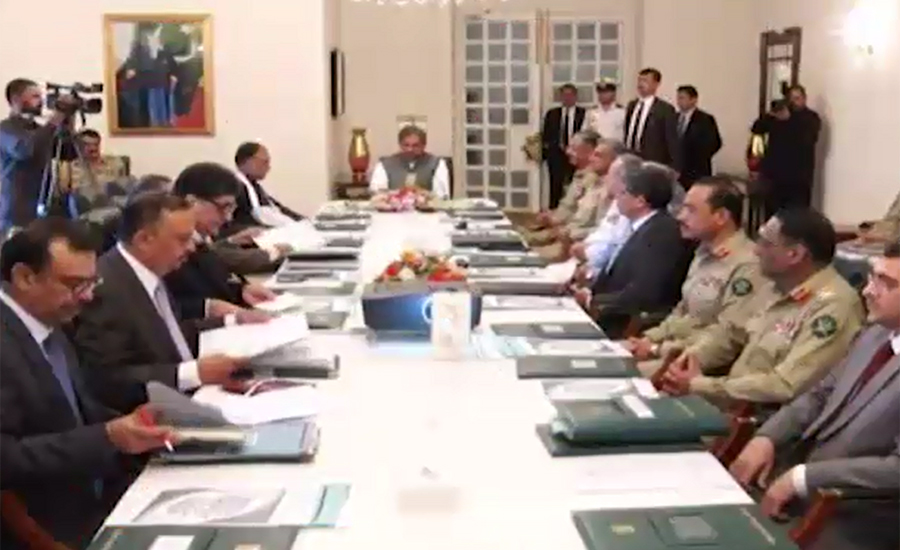 ISLAMABAD (92 News) – Prime Minister Shahid Khaqan Abbasi chaired the 24th meeting of the National Security Committee (NSC) at Prime Minister’s House on Tuesday. The meeting was attended by the Minister for Interior Ahsan Iqbal, Minister for Defence and Foreign Affairs Khurram Dastgir Khan, Minister for Finance, Revenue and Economic Affairs Miftah Ismail, Chief of Army Staff General Qamar Javed Bajwa, Chief of Naval Staff Admiral Zafar Mahmood Abbasi, Chief of Air Staff Air Chief Marshal Mujahid Anwar Khan, Director General ISI Lt Gen Naveed Mukhtar, National Security Adviser Lt Gen (R) Nasser Khan Janjua and senior civil and military officials. The National Security Committee condemned the reign of terror unleashed by Indian occupation forces on innocent Kashmiris and resolved that Pakistan would continue to play its role in realising the right of the people of Kashmir to self-determination. The committee also condemned the brutal repression of the Palestinians by the Israeli state and reaffirmed Pakistan’s support for the people of Palestine in their just cause. Expressed satisfaction over the transformational reforms introduced by the government with regard to FATA and Gilgit-Baltistan, the committee observed that the mainstreaming of FATA and its merger with Khyber Pakhtunkhwa and the grant of the same rights under the Government of Gilgit-Baltistan Order 2018 to the people of Gilgit-Baltistan as are available to the people in the rest of the country have gone a long way in fulfilling the aspirations of the people of these regions with far-reaching outcomes for national life. The Interior Ministry briefed the committee on the basic features of the new visa policy aimed at making Pakistan a tourist and business friendly country. While appreciating the efforts of the Ministry of Interior, the Committee observed that it must also be ensured that all supportive systems, databases and verification networks are in place and fully operational, in view of which it was agreed that the ‘visa on arrival’ facility should be initiated as a pilot project in the first instance. The committee reviewed in detail the recent global and regional developments and their implications for Pakistan, the committee observed that while the geopolitical situation was rapidly evolving, Pakistan would continue to make diplomatic and political efforts for peace and stability. For this purpose, the committee emphasised the need for a much more proactive diplomacy.