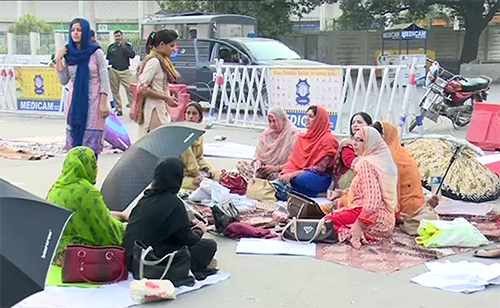 LAHORE (92 News) – The Young Nurses Association (YNA) continued to protest for the third day against the government for not fulfilling their demands of health risk allowances and service structure reforms in front of Punjab Assembly, on Wednesday. The protesting nurses have spent the night at The Mall. The Young Nurses Association continued their sit-in throughout the day to press for their demands on the Faisal Chowk on Tuesday (yesterday). A severe traffic mess was witnessed at the Faisal Chowk due to the nurses’ sit-in after nurses called for implementation of the announced service structure as well as their health risk allowance. Previously, their talks with the Punjab CM Adviser on Health failed. They said that they were not being granted the service structure despite several assurances.