CHRISTCHURCH/WELLINGTON (92 News) – New Zealand Prime Minister (PM) Jacinda Ardern visited Wellington’s Kilbirnie Mosque to express solidarity with the Muslims who were martyred in the terrorist attacks in Christchurch mosques. She met with the community and laid a wreath at the Mosque in memory of the victims of the Christchurch attack. 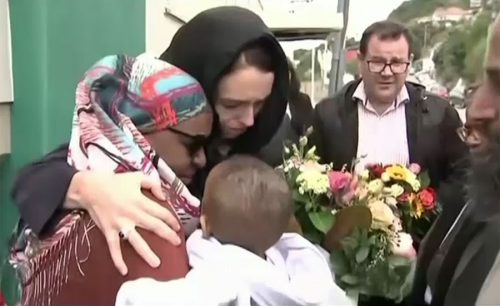 Speaking to the journalists on Sunday, Ardern said that New Zealand Prime Minister Jacinda Ardern said her office received a manifesto from the gunman who killed 50 people in two Christchurch mosques minutes before Friday's attack. “I was one of more than 30 recipients of the manifesto that was mailed out nine minutes before the attack took place,” she said. "It did not include a location, it did not include specific details," she said, adding that it was sent to security services within two minutes of receipt. Ardern said she had read "elements" of the lengthy, meandering and conspiracy-filled far-right "manifesto". "The fact that there was an ideological manifesto with extreme views attached to this attack, of course, that is deeply disturbing," she said. The death toll in the New Zealand mosque shootings rose to 50 on Sunday when police found another body at one of the mosques, as families waited for authorities to formally identify victims and release their bodies for burial. Arden said bodies would be handed over to families from Sunday evening. “It is likely, however, to be a small number to begin with,” she told a media briefing, adding that all should be returned by Wednesday. Ardern said police would be posted at all mosques while they are open. The accused gunman, a right-wing extremist and self-confessed white supremacist Brenton Tarrant, documented his radicalisation and two years of preparations in a lengthy, meandering and conspiracy-filled far-right "manifesto". Tarrant, 28, was charged with murder on Saturday and was remanded without a plea. He is due back in court on April 5 where police said he was likely to face more charges. Earlier, the New Zealand PM was wearing a ‘dupatta’, Saturday visited families of Christchurch terror attack victims and her expression of solidarity with Muslims in this hour of grief. Having tears in her eyes, Ardern said she brought messages of love, support and grief on behalf of all New Zealanders to the crowd gathered at Canterbury Refugee Resettlement and Resources Centre.