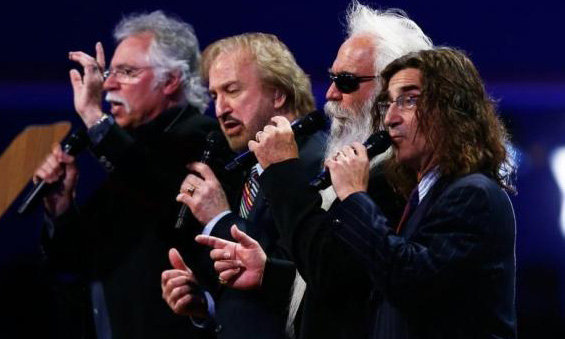 NASHVILLE - The Oak Ridge Boys, Jim Ed Brown and the Browns, and the late guitarist Grady Martin were named on Wednesday as the 2015 inductees into the Country Music Hall of Fame. Singer Brenda Lee announced the artists who will be welcomed into the elite group at a special ceremony in Nashville later this year. The Oak Ridge Boys, a country and gospel quartet whose hits include "Elvira" and "Bobbie Sue," sang backup on Paul Simon's hit "Slip Slidin' Away" and toured with singer Johnny Cash in their early days in country music. The group credited Cash with helping them make the transition from gospel to country music. "He took us on the road with him and paid us more than we asked and tipped us 10 percent above that," Duane Allen said at the ceremony. Jim Ed Brown formed the Browns trio with his sisters, Maxine and Bonnie. The trio's smooth harmonies brought a sophisticated sound to country music in the 1950s and 1960s. They influenced the Beatles and the Osborne Brothers, as well as current hit makers Lady Antebellum and Little Big Town. With hits such as "The Three Bells" and "Scarlet Ribbons," the Browns crossed genres, from country to pop and R&B. Brown said when he was told about the honor, he lost it for two or three minutes. "I admit that a tear or two fell," said the singer, who fought cancer in the past year. He is now in remission and back performing at Nashville's famed Grand Ole Opry. "This is the golden," he added. "You can't go any higher than this in country music." Martin, who died in 2001, was an original member of Nashville's "A-Team" of touring and sessions musicians in the 1960s and 1970s. His guitar licks are instantly recognizable on Marty Robbins' "El Paso" and Willie Nelson's "On the Road Again." He also played on sessions with Elvis, Woody Guthrie, Roy Orbison and Joan Baez. The Hall of Fame was created in 1961 to preserve the history and traditions of country music. - REUTERS