Obama, Castro meet as they work on thawing US-Cuba ties 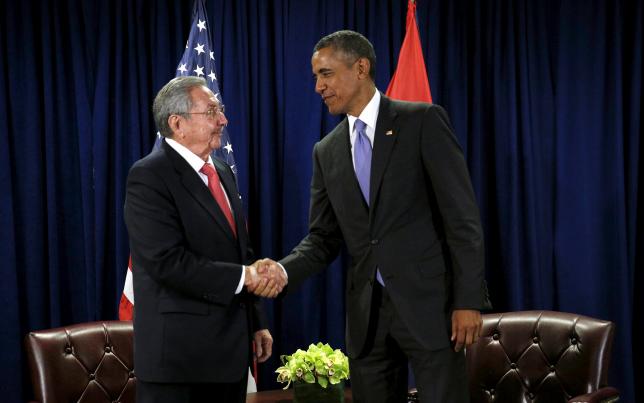 Obama, Castro meet as they work on thawing US-Cuba ties

NEW YORK – US President Barack Obama shook hands with Cuban President Raul Castro at the United Nations on Tuesday in a rare one-on-one meeting between the former Cold War foes as they work toward improving relations after decades of animosity. Castro, in the first speech at the UN by a Cuban president since his older brother Fidel addressed the Millennium Summit in 2000, said on Monday the two countries can normalize ties only after Washington ends its trade embargo and returns the Guantanamo US naval base to Cuban control. Cuban Foreign Minister Bruno Rodriguez said Castro emphasized both points in the meeting with Obama, which he called "respectful and constructive." The two presidents first shook hands at Nelson Mandela’s funeral in December 2013. They stunned the world late last year by announcing detente, and in July, the United States and Cuba restored diplomatic relations after a 54-year break. Obama told the UN on Monday he was confident the US Congress would eventually lift the embargo. His administration has said it does not intend to return the naval base, though it is working hard to close the controversial prison there. The two men and their delegations met on the sidelines of the United Nations General Assembly. They showed an easy rapport, rising out of their seats to shake hands while Obama paused to button his suit coat. Obama and Castro have only interacted a handful of times before, including a meeting at the Summit of the Americas in Panama earlier this year, a phone call last year when they first agreed to jumpstart the US-Cuba relationship, and a phone call last week. "The pace of the process toward normalization of relations between the Cuba and the United States will depend on the lifting of the blockade," Rodriguez said. U.S. officials have said on condition of anonymity they might consider abstaining during an annual UN General Assembly vote next month to condemn Washington's embargo on Cuba, provided the resolution's language is toned down. On Oct. 27 Cuba will present the anti-blockade resolution, Rodriguez said. –Reuters "For as long as the blockade persists we will continue to present these draft resolutions," he added.