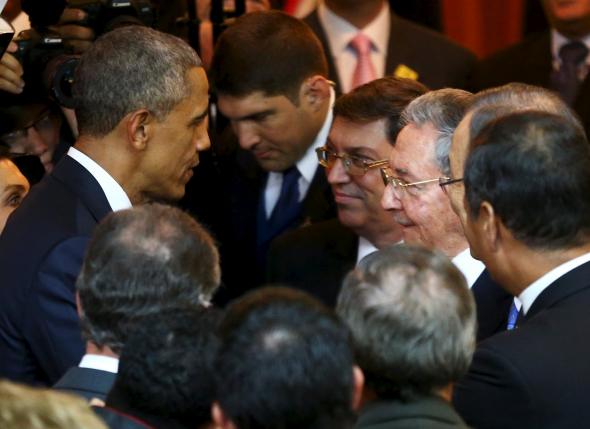 PANAMA CITY - US President Barack Obama and Cuban President Raul Castro shook hands on Friday at a summit in Panama, a symbolically charged gesture as the pair seek to restore ties between the Cold War foes. A photograph showed Obama and Castro, both wearing dark suits, chatting in a small group of leaders at the summit's opening ceremony. A White House official confirmed the two men shook hands and spoke briefly. "This was an informal interaction and there was not a substantive conversation between the two leaders," the official said. Obama and Castro are expected to meet again on Saturday and talk about their efforts to restore full diplomatic relations and boost trade and travel between the two countries. Their rapprochement, first unveiled in a historic policy shift in December, is the central issue at the Summit of the Americas meeting in Panama. "As we move towards the process of normalization, we'll have our differences government to government with Cuba on many issues. Just as we differ at times with other nations within the Americas, just as we differ with our closest allies," Obama said earlier on Friday. But the 53-year-old Obama, who was not even born when Fidel and Raul Castro swept to power in Cuba's 1959 revolution, also said the United States is no longer interested in trying to impose its will on Latin America. "The days in which our agenda in this hemisphere so often presumed that the United States could meddle with impunity, those days are past," he said. Apart from a couple of brief, informal encounters, the leaders of the United States and Cuba have not had any significant meetings since the Castro brothers toppled US-backed dictator Fulgencio Batista and then steered their Caribbean country into a close alliance with the Soviet Union. Colombian President Juan Manuel Santos hailed Obama's push to improve relations with Cuba, saying it was helping to heal a "blister" that was hurting the region. However, Cuban dissident Guillermo Farinas said civic groups in Cuba have been sidelined from talks and appealed to Obama to support their push for more democracy. "The Cuban government is showing no goodwill ... They don't want to make any kind of concessions," he told Reuters. Obama, who met with activists from across Latin America, including two Cuban dissidents, appears to be close to removing communist-run Cuba from a US list of countries that it says sponsor terrorism. Its inclusion on the list brings a series of automatic US sanctions and Cuba is insisting it be taken off as a condition of restoring diplomatic ties. Washington imposed trade sanctions on Cuba from 1960 and broke off diplomatic relations with Cuba in 1961, but the ensuing freeze did it no favors, said Ben Rhodes, Obama's deputy national security adviser. "Our Cuba policy, instead of isolating Cuba, was isolating the United States in our own backyard," he noted. COOPERATION The two countries have maintained contact through interests sections in Havana and Washington since 1977, and in recent years they have increasingly cooperated on issues such as migration and drug trafficking. The State Department has now recommended that Cuba be taken off the terrorism list, a US Senate Foreign Relations Committee aide said. Obama is expected to agree, although it is not clear whether he will announce it during the summit. Obama has already used his executive authority to ease some trade and travel restrictions, and is seeking to encourage nascent small businesses in Cuba by allowing more exports there. But only Congress, controlled by Republicans, can remove the overall US economic embargo on the island. The rapprochement by Obama, a Democrat, has met some resistance in Washington and among some influential Cuban-Americans. Critics say Cuba should not be rewarded unless it changes its one-party political system. While Obama's policy has been widely praised around Latin America, this was tempered last month when his administration imposed sanctions on Venezuela, Cuba's closest ally and main benefactor. That controversy now hangs over the summit this weekend. Venezuelan President Nicolas Maduro plans to present Obama with a petition signed by millions of people demanding that the sanctions be reversed. He is certain to receive support from Castro and other left-wing leaders in Latin America. "It is no time for imperialism, threats, it is time for peace, cooperation, union, progress, prosperity," Maduro said on arrival in Panama. - Reuters