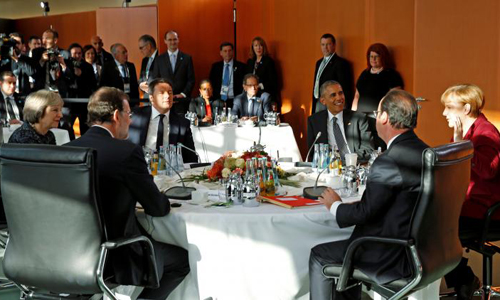 BERLIN- U.S. President Barack Obama and European leaders on Friday underscored the importance of working together in NATO and chided Russia for its bombing of Syria and failure to implement a Ukrainian peace accord.
The White House statement followed a meeting at which Obama sought to reassure his counterparts from Germany, Britain, Spain, Italy and France that his successor Donald Trump would not break up the transatlantic alliance. Trump raised concerns during the campaign when he said he could withhold military aid from NATO allies if they had not met their defence commitments and said he would forge closer ties with Russian President Vladimir Putin. "President Obama expressed confidence that, even at a moment of great change, democratic values have done more to advance human freedom and progress than any other system in history, and will continue to do so going forward," the White House said. The leaders agreed on the need to work together to stabilise the Middle East and North Africa, as well as securing diplomatic resolutions for the conflicts in Syria and eastern Ukraine. European leaders had sought Obama's support as they prepare to extend sanctions imposed on Russia by Washington and Brussels in 2014 following its intervention in eastern Ukraine, and consider fresh sanctions over Russia's actions in Syria, where it backs Syrian President Bashar al-Assad. German Chancellor Angela Merkel told a news conference with Spanish Prime Minister Mariano Rajoy that no decisions had been made about extending the Ukraine sanctions, but actions to implement the Minsk peace accord were not sufficient. Merkel said the leaders discussed their concerns about Syria during their meeting on Friday, but did not talk about imposing Syria-related sanctions against Russia that have been sought by the Syrian opposition. Obama and the EU leaders called for an immediate end to attacks on rebel-held parts of the city of Aleppo by Syrian government forces and their allies Russia and Iran that monitoring groups say have killed dozens this week alone. Syrian opposition officials on Friday met EU foreign policy chief Federica Mogherini and other officials and urged them to focus on protecting civilians and lifting the siege, said Anas al-Abdah, who heads the Syrian National Coalition. He said he had hoped for stronger words from Obama and the EU leaders, and called for Washington and Brussels to put more "real pressure" on Russia and Iran. U.S. and EU officials have stressed the need for a political solution, including the departure of Assad, but Trump has said he views the fight against Islamic State as a bigger priority. EU leaders are expected to extend sanctions related to Ukraine in December or January. Obama and the European leaders "unanimously agreed on the continued need for Russia to fully meet its commitments under the Minsk agreements and that Ukraine-related sanctions against Russia must remain in place until it does so," the White House said. They said a durable ceasefire in eastern Ukraine was needed to move forward with free and fair local elections in the occupied regions of Donetsk and Luhansk. -Reuters